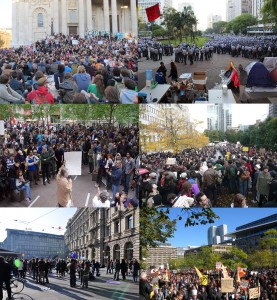 By Authors of the files (by the same order of the files): Roland zh، Lutz، Crispin Semmens، Justinform، Biella “Gabriella” Coleman، David Shankbone. (Combined by Abbad). [CC-BY-SA-3.0 ], via Wikimedia Commons

If you rely on US news exclusively, you most likely are insulated from what our media has decided you do not need to know. You are supposed to care about investigations of scandals and the decision about what kind of healthcare is right for you. The rest of the world is doing just fine, and all of them want nothing more than to exchange goods and friendship with America.

What don’t they want you to be concerned about? Real democracy is taking hold in these countries. The plutocracy that we actually practice in this country is not true democracy, despite what our elections and text books tell us. What is happening in the rest of the world is the fruit born when the people can only take so much. And the last thing they want you to know is that the movement is actually working, growing and spreading. Our government decries those who attempt to stifle these protests in other countries, while militarizing our own police forces to be able to defeat them on American soil. Where, you ask, are all these protests happening?

Please DO NOT remain calm – all is NOT well…