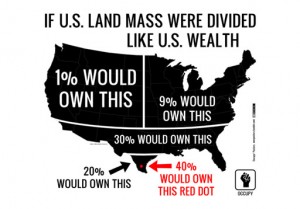 Every year in January, I go to the big music trade show in Anaheim (NAMM); it’s both a chance to meet with people on a business level and a chance to spend quality time with friends in the area. And, every year I’m struck by the divides; not only the one between the big companies with their huge display booths and the small companies with one or two people who scrimp and save to get a small booth for the show, but on a wider scale, the inequality present in the LA/Orange County metro area.

On Wednesday evening, I went out for dinner with an old friend and his wife. He and I grew up in what for the time was an upper middle-class neighborhood, so the concept of privilege isn’t lost on us. They decided we’d have dinner in Newport Beach that night, so we took the short drive from my hotel down to Newport. As you first get into Newport Beach, the first thing you notice are the houses on the hills overlooking the ocean, and the gates on the road leading up to the houses. The houses are huge, sprawling things with big yards and huge windows facing the ocean. Want to live here? Better have a few million stashed away to even talk with a realtor.

As we proceed into town, we drive past the harbor. Here, you see lots of boats; the cheapest of which would cost as much as a house in most places in LA itself. The road past there looks like a normal suburban area, until you notice what the various stores sell. Here, you don’t see a Best Buy; you see custom audio consulting services to design audio systems for individual rooms. Instead of your Chevy or Ford dealers, you see Bentley and Ferrari dealers. Then, we get to where we were going for dinner; Fashion Island.

Fashion Island is an outdoor mall, like many others in California. But, once again, there’s a surreal quality to it. Instead of a fountain, they have a koi pond. There’s a big Rolex store and other such stores catering to the people who have more disposable income each month than a lot of the surrounding cities’ residents have in total income for the year. However, they also have sidewalk vendors there; we stop and talk to one of them who sells lamps and lamp kits made out of recycled milk bottles.

A second generation Angelino whose family’s originally from Mexico, he’s there day in and day out supporting his wife and kid with what he makes from his stand. On a good day, he might make as much as $500; most days, he makes $100 or less. We buy both a lamp and kit from him, and go to dinner. Fortunately, there’s a few affordable chain restaurants in the mall; we stop at one of them for dinner, and then head back to drop me off at my hotel.

The next night, I’m visiting a couple of my friends who live in LA proper. Both of them work in tech support for a software company, and are successful artists in the local music scene. The block they live on which has fifteen houses or so could fit into the property of one of the houses in Newport Beach. We talk for a while, and then walk down to a local taqueria to grab some tacos and flan. Even with the reasonable prices of the restaurant the night before, our bill for everything ends up to be less than what the bill was for one of us the night before. We grab our tacos and flan, and walk back to the house. 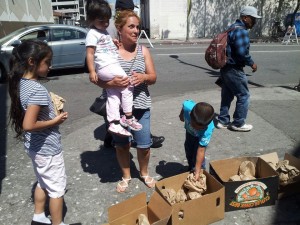 The last time I’d been to that house prior to Thursday was the year before. I was in town for the show, but stopped at the house to help them in a community outreach program called HELP Los Angeles. HELP Los Angeles goes out once a month or so and spends a day helping the homeless by distributing things like food or personal hygiene kits. That time, it was personal hygiene kits. Around 15 of us sat wherever we could find room inside (it was raining), and divided up the donations of sanitizer, toothbrushes, etc. they’d received and made individual kits to hand out the next day. We made close to 150 kits that night, and handed them out the next day to the homeless on Skid Row in downtown LA. They were gone in under a half hour; we could have used many, many more.

The gap between what we had and what the homeless had was stunning, to put it mildly. We tend to forget how lucky we are to have roofs over our heads when it rains, and a place to shower and cook food- much less that we have food. However, the gap between us and the people in Newport Beach who own the homes on the hill is even larger; we might as well be homeless if we take our wealth as a percentage of what they have. And, to have the gap between the people in Newport Beach and the homeless on Skid Row a mere 50 miles away is not only mindboggling; it’s obscene.

Imcome inequality in this country is a real problem, and it’s only getting worse. What can we do about it? We can demand that our Congressthings do their jobs and support a raise in the minimum wage. We can demand that employers who don’t pay their employees a living wage be held accountable. We can advocate for the homeless by supporting a homeless bill of rights, as was passed unanimously in Duluth earlier this month.

What we can’t do is remain silent.