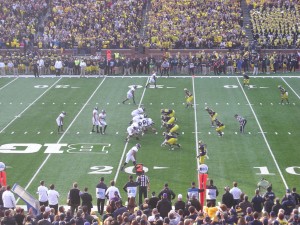 By Michael Barera (Own work) CC-BY-SA-3.0, via Wikimedia Commons

The football players at Northwestern University in Evanston Illinois are attempting to form a union. The College Athletes Players Association (CAPA) has petitioned the National Labor Relations Board (NLRB) to recognize them as a union which would enable them to negotiate with the University on the players behalf.

In a Huffington Post sports article, Leo Gerard, the President of the Steelworkers Union, which is covering CAPA’s legal expenses – but will not represent the players nor collect dues from them – asserts that the student athlete’s ARE in fact employees of the University based upon the number of hours per week the athletes spend in training or games.

The NCAA disputes this claim, saying that athlete’s are NOT employees, and that they DO get paid via scholarships. NCAA rules currently prohibit athletes from being paid with the exception of said scholarships which are often revoked if injuries prevent the athletes from competing in their sport. The NCAA can also levy punitive fines against the athletes and restrict the players from competition for changing schools.

Yet the NCAA is a multi-billion dollar per year enterprise, and the top tier college football programs generate hundreds of millions of dollars in revenue for their respective schools.

Sadly, the one part of the student-athlete equation that the NCAA has no mandates for is whether or not the student athletes earn a degree. Over 40 percent of college football and basketball players do not graduate from the schools who benefit from their athletic prowess.

Thankfully enough of these athletes are learning about strength in numbers – not only on the field, but at the bargaining table as well.