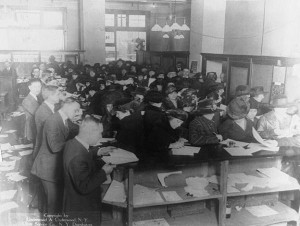 There are at least 1,910 forms and supporting documents on the Internal Revenue Service (IRS) website. The tax form that most Americans fill out for the purpose of federal tax liability has a 206 page set of instructions that go with it. American citizens are taxed at varying rates: up to 39.6 percent of their income.

Can’t we simplify this ? What if the existing tax code with its page after page of additions and exclusions was thrown out so that all citizens and businesses would pay the same flat rate on their income? No more having multi-billion dollar corporations paying less taxes than the average citizen pays.

Instead of pages and pages of tax code that favor those who helped write the tax code, one flat tax rate would apply to all. If all income was subject to a 7 percent tax paid to the federal government and a 3 percent tax was paid to the state or local municipality where the citizen or business resided the federal, state and local governments would have enough money to provide the types of programs and services that are now at the mercy of political wrangling. Most, if not all, citizens would be overjoyed to bring home 90 percent of their gross wages.

If the only things that are certain in this life are death and taxes, can’t we at least try to make the second one feel a little less like the first?