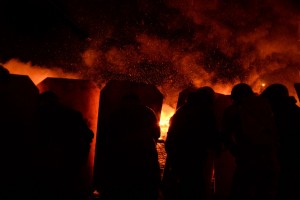 By Mstyslav Chernov/Unframe/http://www.unframe.com/photographers/102-mstyslav-chernov.html (Own work) [CC-BY-SA-3.0], via Wikimedia Commons

Independence Square in Kiev had a few days of peace, but then saw a resurgence of violent clashes with police, resulting in at least 25 deaths and over 240 seriously injured, according to the Health Ministry. The clashes began escalation Monday as parliament tried to table debate regarding reform and changes to the constitution, an agreed upon condition that had led to a compromise of sorts between the opposition and the government of Ukraine, erupting into even more deadly clashes on Wednesday morning as police attempted to clear the tightly held encampment.

A crowd of over 10,000 protestors moved from Independence Square toward parliament to pressure the government to include their proposals in the discussion, as was previously agreed to by both sides. Police blocked the opposition from submitting their proposal for debate, with demonstrators accusing the government of not meeting the agreed upon compromise as a result. Inside, some members of parliament could be heard decrying the maneuver as illegal and calling for reasonable debate. By Tuesday evening, the crowd had grown to 20,000.

It is unclear who started the violence on Tuesday, with both sides blaming the other for the escalations. Talks are to resume on Wednesday between the opposition leaders and the president, according to a statement from the speaker from parliament, Volodymyr Rybak.

BBC reports “The entire Kiev metro has been shut down, and police have converged on the edges of Independence Square, the site of the main protest camp since November. Protest leader Vitaly Klitschko urged women and children to leave the square, saying they could not ‘exclude the possibility of use of force’.” Al Jazeera reports the demonstrators have been given a deadline of 11 am Wednesday to clear the square.

The draft for changes to the constitution proposed by the opposition calls for a return to the 2004 constitution that would shift key powers from the president to parliament, stripping President Yanukovych of his ability to appoint the PM, cabinet members and regional governors. The 2004 constitution was repealed in 2010, shortly after Yanukovych came to power.

Sanctions are being threatened from the European community, as well as Vice President Biden, Secretatary of State John Kerry, , UN Security Advisor Catherine Ashton and German foreign minister, Frank-Walter Steinmeier have all contacted Yanukovych and cautioned restraint and a political/peaceful resolution to the protests.

Meanwhile, Moscow has issued another $2 billion tranche payment to the Ukraine, and Putkin greatly influenced Yanukovych toward clamping down on the protestors when he was visiting Putkin in Sochi. Perhaps the vested interest in influencing Yanukovych comes from the fact that the country purchases its oil and gas from Russia, while Russia imports the majority of Ukraine’s major commodity: food. A rather convenient arrangement Moscow would like to see continue while the PEOPLE of Ukraine would like to see other options considered.