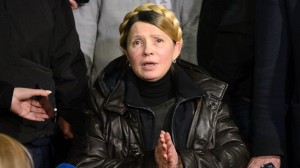 February 22nd was a day of reckoning for Ukraine and the Yanukovych government. The Washington Post reports that after the bloodiest week in three months of protests over Yanukovych’s desire to strengthen ties with Russia instead of gravitating towards the EU, the Ukrainian parliament voted to remove him from office on the grounds of gross human rights violations and dereliction of duty, and to hold new elections in May. The vote was 380 – 0, with Yanukovych’s supporters either absent or abstaining.

They also voted to free Yulia Tymoshenko, a former prime minister and head of the opposition to Yanukovych, from prison, where she had been since 2011. She had been sentenced to seven years on charges that many both at home and internationally decried as being politically motivated. Tymoshenko, who is suffering from a back injury, was wheeled onstage in Independence Square, where she addressed a crowd estimated to be in the tens of thousands.

She said that Ukraine would not be truly free until “everyone bears a responsibility for what they have done… If we don’t prosecute, we should be ashamed.” She also told the crowd “You changed everything — not the politicians, not the diplomats, you changed the world.” She also described the ousted government as “a cancer.”

Yanukovych appeared on television Saturday afternoon in a prerecorded interview to say: “I am not planning to leave the country. I am the legitimate president, and I am not going to resign.” He said the opposition politicians in parliament were “bandits” and their actions  were “illegal,” and called the protesters “hooligans.”

He further went on to say “What we witness now resembles Nazi occupation,” and that he had talked to Vladmir Putin, who had told him that “We will negotiate.” However, the other party supposedly in the negotiations (the US), released a statement of support for the parliament’s decision, and urged “the prompt formation of a broad, technocratic government of national unity.”

While the people in Kiev seemed to be happy with the changes, leaders of the ousted government, especially those from southern and eastern Ukraine, said they would oppose the new measures.

Only time will tell what Ukraine will look like a week from now, much less the two months until the elections. At one point in her speech, Yulia Tymoshenko said, “I am coming back to work. I won’t waste a minute to make sure you are happy in your own land.”

Occupy World Writes reaffirms our commitment of solidarity with the Ukrainian people, and we wish them the best as they go through the growing pains of creating a more truly representative government.