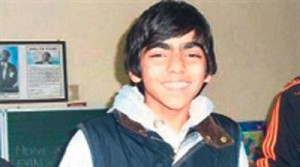 15 year-old Berkin Elvan was struck with a tear gas canister last June in Istanbul’s uprising at Gezi Park. He had gone out to buy bread for his family and was not part of the demonstrations, but became an innocent victim through the indiscriminate activities of the riot police. After nine months in a coma and 5 operations to save his life, Berkin died on Tuesday. His death and funeral sparked a resurgence of the demonstrations throughout Turkey. 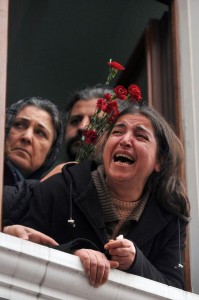 The agony of grief shows in the face of Berkin Elvan’s mother as his coffin begins its journey through the streets of Istanbul. Photo courtesy Ozann Kosee via Twitter.

President Abdullah Gul, along with other public figures, issued messages of condolence to the family of Berkin Elvan, while Prime Minister Tayyip Erdogan stepped up his rhetoric, condemning the protestors and instructing riot police to fire water cannon, tear gas and rubber pellets on crowds in efforts to stop tens of thousands of protesters reaching Taksim Square in Istanbul.

Erdogan came to power 11 years ago, winning  elections after promising liberal reforms and a secular government that would help position Turkey on the world stage and possibly bring about entering the EU. He has succumbed more and more to pressures from religious leaders in his government, causing loss of support and contributing to the recent uprisings. He now faces local elections on March 30 with presidential elections scheduled for August. “The prime minister has vowed to step down if the AKP, in power since 2002, loses the March 30 elections, seen as a test of his popularity after last year’s unrest and an ongoing graft probe that has ensnared key AKP allies,” reports Dilay Gundogan in an AFP article.

Ballot boxes are only as trustworthy as the process by which they are utilized. Judging by Erdogan’s declarations and views on democracy, we hesitate to place confidence in them. 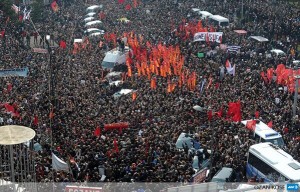 Thousands gather as they carry the coffin of Berkin Elvan during his funeral in Turkey. Photo courtesy Ozann Kosee via Twitter.

Erdogan believes “democracy” would consist of a country that has limited, if any, internet access, outlawing YouTube and Facebook as well as other forms of social media, complete control of the press, and continuation of policies that pit Turkish populations against their Kurdish neighbors. In his world, “democracy” includes the persecution and systematic annihilation of an entire ethnic group living in his country. His future includes “democracy” as shown by letting the government do as they please, and the people are not allowed redress – not even assembly at parks and for national events. In his visions, “democracy” is alive when riot police attack mourners of a 15 year old boy who died through the actions of his orders.

What the Prime Minister does not seem to understand about democracy is that it speaks for itself. It does not need a government to unite neighbors when their last remaining park is threatened by development. Democracy is seen by looking at the millennial generation of young people in Turkey and Northern Kurdistan able to talk, communicate and share common goals and interests. Erdogan will be defeated by the death of Berkin Elvin and the dreams he represents for a people who now speak with their own united voice.

Occupy World Writes extends our deepest and most sincere sympathy to Berkin’s family. May his face be remembered as people unite for an election that gives them the power to choose true democracy versus Erdogan’s version.