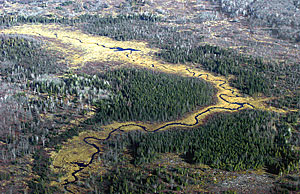 PolyMet mine site. Photo by Mike Possis via North Star Chapter of the Sierra Club

On March 17th, HF 3094 was introduced in the Minnesota House of Representatives. This bill, like others recently introduced in various state legislatures, calls for nullification of various Federal statutes; in this case EPA regulations. Nullification in general is a topic we’ll cover in the near future; in this post, we’ll cover why certain representatives are pushing such a move, and why what’s behind it is a bad deal for the citizens of Minnesota.

PolyMet is a Canadian company with its headquarters in Toronto and its operating offices in Minnesota (St. Paul). The company owns the mining rights to the NorthMet deposit of the Mesabi range, which was formerly the main source of iron ore for the US if not the world. However, we aren’t talking iron mining here (the high grade iron ore was mined out long ago); PolyMet (a company with zero mining experience) wants to mine an area that hasn’t been mined before, by extracting copper, nickel and other metals from sulfide ore. PolyMet’s main financial backer is a Anglo-Swiss multinational commodity brokerage company named Glencore Xstrata.

Glencore’s the largest such company in the world; the only comparable predecessor in size and scope would be Enron. They’ve been cited for numerous environmental and human rights violations over the years, and the founder (Marc Rich) was on the FBI’s 10 most wanted list for fleeing the country in 1983 over insider trading, tax evasion, wire fraud and dealing in embargoed Iranian oil.  He was pardoned by Bill Clinton at the end of Clinton’s second term. A fun fact- Eric Holder as deputy AG was instrumental in getting Clinton to pardon Rich. Bill Clinton’s gone on record on numerous occasions apologizing for Rich’s pardon.

Currently, the chairman of Glencore’s board of directors is a man named Tony Hayward. Tony’s name should be familiar to you; he was the CEO of BP during the Deepwater Horizon oil spill in the Gulf of Mexico; the man who infamously stated that he “would like his life back” while his company’s oil rig was spilling oil in the greatest environmental catastrophe to ever happen in the Gulf. With him in charge, what could possibly go wrong? 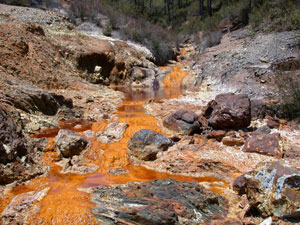 The main problem with sulfide mining is simple chemistry – water plus oxygen plus sulfur gives you sulfuric acid. Yes, you extract the metals you’re looking for, but you also leave behind large scrap piles known as tailings which, when left to react with normal weather, will create acid runoff. And, considering PolyMet’s talking about processing anywhere from 32,000 to 100,000 tons of ore per day, that’s a lot of tailings.

PolyMet will be using the Erie Plant for its processing, which is a former taconite processing plant. The ore will come via rail through public lands – the Superior National Forest. With the safety record of mining and oil companies when it comes to transporting materials and products via rail, once again, what could possibly go wrong?

PolyMet’s also proposed to exchange land with the US Forest Service – 6,550 acres of the forest to use as a copper-nickel sulfide strip mine. By putting this land under private control instead of public control, PolyMet could bypass such pesky environmental laws as the Weeks Act, the Endangered Species Act and the National Environmental Policy Act.

Either way, there would be an issue with acid mine drainage (AMD). And, this in turn would affect the St. Louis River and Lake Superior. AMD is a very long term problem; the effects have been projected to last anywhere from 2,500 to over 10,000 years. And, the Great Lakes contain 18% of the world’s freshwater– there wouldn’t be any way to restrict the AMD to Lake Superior alone.

So why the nullification push?

A simple answer- jobs. The main industries in northern Minnesota used to be mining and logging. With the iron mines exhausted for the most part and most of the remaining forests public land, the main industry’s been tourism. And, with the recession and recovery, tourism hasn’t been exactly booming; it’s hard to justify a vacation if it will cut into what you need to survive.

However, as usual with these projects, the majority of jobs would be short term, with only a few permanent jobs with a long duration.  And, the mine’s estimated to have a twenty year life; the cleanup afterward is expected to take anywhere from 200 to 500 years. Is the long term cost worth the short term gain? We think it isn’t.

The first EPA review of the PolyMet plan (2010) earned PolyMet the lowest ranking: Environmentally Unsatisfactory-Inadequate. Among the reasons given for the ranking were missing information, failure to address pollution problems, structural issues, and lack of financial assurance analysis. The state said in February that they needed to redo a big part of their study because many of the assumptions used to calculate the impact were based on flawed data.  The EPA released a more favorable report last month, but the time set aside for public comment generated a previously unknown amount of emails, etc. to the state – over 50,000 that need to be reviewed before anything moves forward.

Hence, the nullification attempt. If PolyMet, Glencore and their lobbyists can get the nullification of EPA regulations passed through the state government, they’re free to poison our waters and forests for generations to come for the benefit of their stockholders.