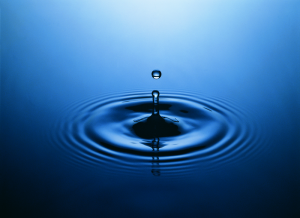 Centuries ago, communities were formed by placing homes around an area referred to as the “commons;” a place where livestock was grazed, public meetings and gatherings were held and people worked together to protect and benefit from these “common” areas of value. The system was so successful it is used in some parts of the world to this day.

One of the principles America was founded on was the theory of the “commons” – that which belonged to all the citizens – was worth protection. Certain necessities were identified as being “common” for the security and stability of the country. As we grew, so did the things that were considered part of the “commons” belonging to the American people.

Clean water is one of those “common” things that Americans expect when they turn on a faucet to shower, cook, drink or bathe children and infants. We enacted the Clean Water Act as a way to specifically protect this “common”, and established the EPA to enforce regulations designed to further protect it.

As with many commodities in this country, Americans have an insatiable need for mass water usage in their lives. Above our daily survival needs, we play in it. We water lawns, crops, animals and city water features with it. We use it in manufacturing, medicine, food processing and energy production. We use it in mining, oil well drilling, fracking operations and coal ash ponds. 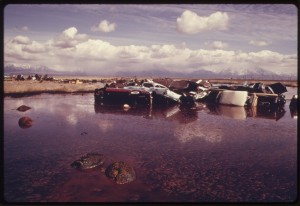 WHY DO WE HAVE THE EPA? This five-acre acid water, oil and sludge-filled pond was used as a dump site by commercial firms before being cleaned up under EPA supervision. It offered no protection to unwary animals. Sheep carcasses are seen in the foreground and at the left along with junked cars and other debris. Photo by Bruce McAllister, 1974, NARA Photographer, Public Domain via Wikimedia Commons.

Yet we seem to have no appetite or desire to continue keeping it clean. Recently, we have heard calls from congressional members to repeal the Clean Water Act and the EPA. Identified as “job killing regulations”, the theory here is to let corporations do whatever they want to produce however much of whatever they want, with total disregard toward consequences or responsibility. But their bottom lines would swell like water-filled balloons, and the lobby money would benefit everyone involved.

Meanwhile, Americans would face more headlines like we’ve seen recently; Galveston Bay has an oil spill in it; Lake Michigan has oil in it from a refinery that is ramping up to double its production; the Dan River in NC has coal ash waste flowing downstream while Duke Energy employees are filmed pumping more of the sludge directly into the river; Keystone XL approval could poison the largest fresh water aquifer in the nation; and PolyMet, who has never operated a mine before, is demanding that Minnesota open the North Shore for copper/sulfide mining which would drain into Lake Superior. PolyMet’s main financial backer (Glencore Xtrata) has hired Tony Hayward as CEO – Hayward is the same guy you recall from the Deepwater Horizon disaster crying to the media that he wanted his life back.

We see attempts to allow drilling, mining and oil exploration in our national parks and reserves – 12 parks already have drilling in them, while an additional 30 parks could see drilling under existing mineral rights. On March 26, the House heard a bill that would abolish the 1906 Antiquities Act, which has protected some of America’s most sensitive and endangered monuments. 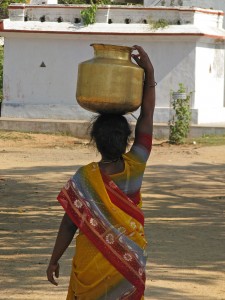 The rich everyday colours of a sari-clad rural women fetching water from the village tank. Water supply is a major problem throughout India and many rural areas lack clean water and supply to the home forcing women to fetch and carry water daily. Most villages lack the resources to invest and ensure a clean supply to each home. Photo by McKay Savage from London, UK [CC-BY-2.0], via Wikimedia Commons

What are our priorities? Climate change has brought drought to California, Texas and other areas of the southwest, freezing weather in the deep south, the Great Lakes are locked in ice, Alaska’s permafrost is melting at a rate far faster than ever anticipated and areas that have been ideal cropland are either flooding or unable to get sufficient water to grow crops. These pressures will bear economic impact and will continue to manifest and worsen in the coming years.

And what is happening here in America is nothing compared to the struggles taking place around the world in the struggle for enough water to survive just by drinking and cooking. Diseases from unclean conditions are free to exert their atrocities on human life as we brace for more drought and famine in areas that have been fertile in the past. Some regions have not been as affected by climate change yet, but refugees are running for their lives and are not in the areas they normally would be in order to plant the spring crops. Cattle herds that are not wiped out by disease or starvation become targets in the terrorism that plagues remote areas of the globe.

We found an organization that looks at the need for clean water from a much, much larger perspective than America’s water problem. We introduce you to Charity:Water.org. This will not solve the overall problem, but it is clearly a step in the right direction.