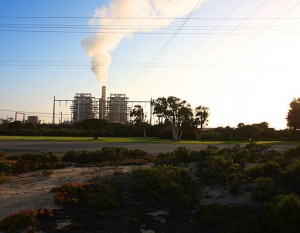 There’s been a concerted push by corporations and conservative lawmakers to create a “Damn the environment! Full speed ahead!” agenda as far as mining and energy goes.Two bills passed by the House of Representatives this month serve as prime examples of this dangerous mindset.

The first was H.R. 3826, which passed on March 6th along a mostly party line vote. Earthjustice summarized the bill in an article written before its passage: “The sponsors of this legislation might just have well have written ‘EPA can issue carbon pollution standards when pigs fly.’ ” The Democrats on the Committee on Energy and Commerce stated that H.R. 3826 “is a bill that would essentially prevent EPA from ever requiring coal-fired power plants to control carbon pollution at any significant level.”  They further state:

“The bill would 1) prohibit the EPA Administrator from issuing, implementing, or enforcing any rule under section 111 of the Clean Air Act establishing greenhouse gas (GHG) emission standards for new fossil fuel-fired power plants unless separate GHG emission standards were established for coal and natural gas plants, and 2) prohibit the Administrator from establishing emission standards for new coal-fired power plants unless the proposed standards have already been achieved for 12 continuous months by at least six U.S. power plants, located at different generating stations which collectively represent the operating characteristics of each power plant, and are each commercially operated for the entire 12-month period. 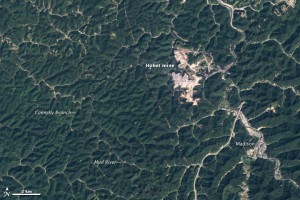 The Hobet mine 1984.
By NASA [Public domain], via Wikimedia Commons

Section 4 repeals any EPA regulation in regard to GHG emissions and fossil fuel power plants that is currently on the books. Sounds pretty horrible, no? But of course, there’s more “good” news- the second bill. 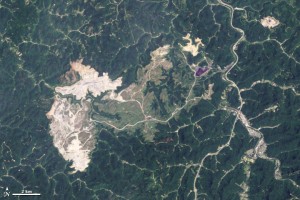 The Hobet mine 2009.
By NASA [Public domain], via Wikimedia Commons

H.R. 2824, which passed the House on March 25th, restores a law passed at the very end of the Bush years that had been overturned by the D.C. District Court that allows dumping of mining waste into streams and waterways, as well as permitting mountaintop removal mining. Once again, the voting mostly followed party lines. House Natural Resources Committee Chairman Doc Hastings (R-Wash.) claimed “Republicans want to create an America that works, and that requires access to affordable energy. If we do not stop the administration from implementing its new coal regulation, thousands of Americans will be out of work and home heating costs for working middle class families will rise.” Never mind that the administration hadn’t put any new regulation in place yet…

Coal-fired power plants produce nearly half the electricity in the United States, which is what makes this such a big deal. Fortunately, neither of these will make it through the Senate, but what if the Senate flips in 2014? We’ve seen all too frequently what happens when corporations are allowed to write their own rules. From the Deepwater Horizon disaster to West, Texas to Mayflower, Arkansas to…  they’ve proven time and again that the only thing that they care about is profit, and not the lives and health of the people and environment around them.