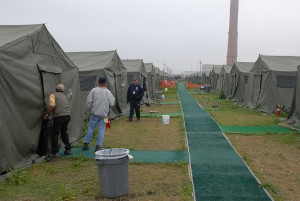 Photo By Marvin Nauman (This image is from the FEMA Photo Library.) [Public domain], via Wikimedia Commons

In a coordination agency move, the Department of Homeland Security, together with the Department of Health and Human Services announced this morning a new open enrollment program for the first national FEMA Education And Recreational Supercamp (FEARS).

The camps are free to any that qualify. Anyone that receives public assistance, the homeless, families that have experienced foreclosure, anyone who has filed bankruptcy, those with credit scores below 750, anyone not earning a higher education degree, artists, teachers, union members, disabled, LGBT community members, political activists and members of any community organization are encouraged to take advantage of the early enrollment period.

Those that enroll early will be able to take advantage of several perks. There are only a limited number of permanent support structures resembling buildings, and only those who enroll early will be allowed to participate in a lottery for space in these structures. “As the camp grows in the coming future, these spaces will be the focal point and areas of envy for new arrivals,” explains Eva Braun, DHHS. Another advantage is preferred treatment once the program becomes mandatory. Those who liquidate any assets will receive lifetime membership once those assets are surrendered to FEARS in exchange for no more fear.

After the pilot programs were rated as overwhelming successes, the government was compelled to add fencing around the camp boundaries. Studies indicated that once the popularity of the camps are realized, people will try to sneak in, or surge the entrances in ways that would disrupt the order of those inside.

“We’ve thought of everything, and no expense has been spared. Our campers can relax, knowing they are secure with the drones patrolling the air above them. They can bask in the sense of well being as we take care of food, medicine and clothing for them. They are lifted from the burden of stress and struggle, knowing they will spend tomorrow in the sameness of today, thus all fear has been eliminated. They have no need for education, employment or self determination, as our decisions on their behalf are always what is best,” reads the FEARS posting. 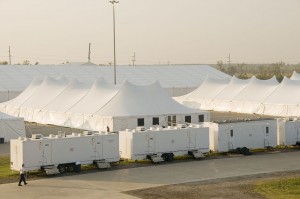 Photo By Patsy Lynch (This image is from the FEMA Photo Library.) [Public domain], via Wikimedia Commons

The Supercamps will feature all the expected camp schedules, including standing roll calls 3 times a day, flag ceremonies, nature awareness, survival training, campfires and sporting activities. Ilse Koch, Director of Crafts and Hobbies for the camps, plans to introduce “Theme Weeks,” where new projects focusing on a central theme will help campers learn new skills while enriching their lives.

The camps are located primarily in the western states in vast lands currently owned by the federal government. With miles of no-man lands established around the perimeter of these camps, the hope is to make those who have previously crossed borders illegally feel more at home, while preventing prying eyes from discovering the joys of FEARS living prior to their own enrollment.

Encouraging early enrollment, President Obama used his power of Executive Order to circumvent the opposition being waged for the program in Congress. He plans to acquire the needed funding by diverting funds from the Pentagon’s discarded plans to build a military base on the north pole to better monitor world security. Those plans sank with the increased global warming that depleted the ice cap before the base could be built and after it was determined there were too many leaks within the project’s administrative staff.

April Fools!  But what if…

Editor’s Note: Satire is fun, but here’s the reality check: It is my belief that the factual reason the federal government is increasing funding for FEMA camps is mostly due to the expected increase in natural disasters as climate change threatens our planet. Meanwhile, the House will attempt to pass a bill today pulling funding from research related to climate change, including NOAA. I really wish that was a joke.