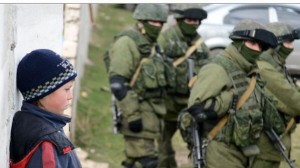 This Ukrainian boy will never forget these “unidentified” soldiers who invade his country, his freedom & his future. Photo via Twitter.

Since we developed language, the way we speak indicates where we are from. Even different regions within a country speaking the same language will develop dialects specific to that area. In the US, if one can not go to work due to illness, in the north they “call in” sick. In the south, they “call out. ” In the north, you might have a can of “pop” on a hot summer day. In the south, you reach for a “soda.”

This is true all over the world. So it came as no surprise to me this morning to watch an interview with Andrij Dobriansky, of the Ukrainian Congress Committee of America (UCCA), to state that those in three eastern cities calling for succession from Ukraine are clearly not native-born Ukrainian Russians, but have come from outside the country and region, speaking the mother tongue Russian. He indicated it is clear both in their misunderstanding of the local population and dialect, as well as their mannerisms and habits.

“They stormed the wrong building,” he said, as he explained the protestors in Donetsk attempting to take a government building. “Once inside, they forced the occupants to walk out on their knees with their heads bowed, calling them dogs.” He went on to explain that these people say they reject the government in Kiev, calling then “gays and Jews.” He says Ukrainians pride themselves on being a diverse culture and by nature do not use these terms when referring to others.

The UCCA’s mission is to support cultural, educational, and humanitarian activities that emphasize the Ukrainian American heritage and provide support for Ukraine’s newly developing democracy. Their offices are located in New York.

It remains to be seen what Russian’s President Vladimir Putin will do in the next month and a half before the Ukraine election is held. Sanctions that have been imposed seem to have little effect on his arrogance and violations of agreements he has entered into. In order to actually do something to get his attention, I believe the strategy must include disallowing the agreement between Exxon-Mobil and Russia’s largest oil company, Rosneft, to drill in the arctic shelf and tap into the large oil reserves in that region. Exxon-Mobil is a US-based company, and despite their size and billions of annual profit, are still subject to laws and regulations of that country.

Major U.S. energy company Exxon Mobil Corp. and Russia’s OAO Rosneft agreed in February of 2013 “to broaden their joint venture by adding seven more licenses to develop oil and gas resources on Russia’s Arctic shelf and to mull a proposal to export liquefied natural gas from the Russian Far East. The companies also signed a separate deal to give state-controlled Rosneft the option of buying a 25% interest in Exxon’s Point Thomson Project, which Exxon says is estimated to hold a quarter of the known natural-gas resources buried beneath Alaska’s North Slope. Exxon owns 62.5% of Point Thomson,” reports the Wall Street Journal.

In so much as Russia seeks to keep a stranglehold on the economy of not only the Ukraine but also Europe in general, they found a new BFF in Exxon to help achieve those goals. “We have a unique partnership,” Glenn Waller, Exxon’s Russian chief, said in an interview in Moscow. “They have the world’s biggest reserves and we have the largest market capitalization,” reports in Bloomberg say. The deal-making process “includes targeting a deposit that may hold more oil than Norway’s North Sea. It will kick off a series of landmark projects… They also plan to frack shale fields in Siberia, sink a deep-water well in the Black Sea and build a natural-gas export terminal in Russia’s Far East.”

Exxon, like most major oil companies of the world, feel their ability to make money and hold power as a result mean they have no respect for political implications of the nations they expect cooperation and future sales from. “Most big U.S. companies, especially those making long-term strategic decisions, dismiss Russia-U.S. politics as something of a soap opera with frequent script changes,” said Chris Weafer, managing director of the Macro Advisory consultants, the same Bloomberg report includes.

Putin continues to invest heavily into keeping Syria’s War going. His interest here lies in blocking the completion of gas and oil pipelines from the middle east to Europe. The war in Syria is what is blocking that pipeline from being finished. The humanitarian side of the crisis has no influence on his thinking or reason. What pipeline in Syria, you ask? We will cover that in the next few days.

The controversy in Ukraine is no more about protecting “Russian speaking Ukrainians” than was the United States claim of “weapons of mass destruction” as an excuse to invade Iraq. Putin can say what he wants, we will believe what is self-evident through the actions of his puppets.

There are no borders when you follow the money.