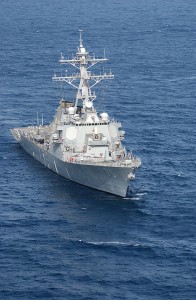 A 90-minute encounter between the USS Donald Cook and a Russian SU-24 fighter aircraft, making 12 low-altitude, close-range passes near the ship in the Black Sea over the weekend, brought some excitment to the crew of the guided missle destroyer.

The passes — ranging from sea level to several thousand feet — did not place the US destroyer in danger, according to Pentagon spokesman Colonel Steve Warren. Attempts to communicate with the Russian aircraft to inquire as to its intentions were met with radio silence.

“This provocative and unprofessional Russian action is inconsistent with their national protocols and previous agreements on the professional interaction between our militaries,”  Warren said.

At Putin’s request, Obama and Putin spoke by phone on Monday evening. Described as “frank and direct,” the conversation reportedly did not go well. This is the coolest the relationship with Russia has been in decades.

This comes following a heightened tension in the Ukraine crisis as more government buildings were seized in various eastern Ukraine cities over the past few days. Tactics, equipment and unidentified provocateurs operating under the exact same methods as we saw in Crimea. Yet Russia wants us to believe there is no connection, while their media reports how Yanukovich is still the legitimate ruler of Ukraine. 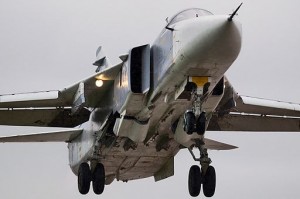 How do we know about the connection with sure confidence? Activists that are homegrown movements bent on democratic change do not take over government buildings sporting automatic, military grade weaponry and maneuvers. The protest in Kiev began as a peaceful group in Independence Square – it did not turn violent until provoked by the riot police, under Yanukovich acting on Putin’s advice, attacked the protestors.

As we continue to hold our breath and pray that Ukraine does not escalate into the next World War, we also hold firm on our opinion and belief that true oppression, as seen in the Arab Spring, the Occupy movement and in Kiev, represents the fact that THE PEOPLE WILL ONLY TAKE SO MUCH!