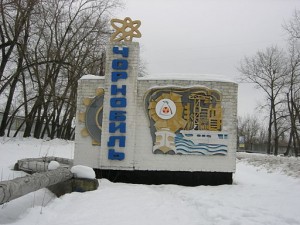 Entrance to Chernobyl. By amosek (Own work) [CC-BY-SA-3.0 (http://creativecommons.org/licenses/by-sa/3.0)], via Wikimedia Commons

On April 26, 1986 at 1:23 AM local time, Reactor #4 at the Chernobyl Nuclear Power Plant near the town of Pripyat, Ukraine, exploded during a reactor systems test. Two workers died within hours of non-radiological causes, and 40 hours later, the 50,000 people residents of the town were told to evacuate the area. Shortly, the 14,000 residents of Chernobyl itself were told to evacuate. In total, 115,000 people were evacuated from the area in 1986, with another 220,000 being evacuated in subsequent years.

The explosion and the fire that raged for ten days afterwards discharged many radioactive substances. The amount of isotopes released was 300 times greater than the Hiroshima explosion, and in some places, the level of radiation was almost 77,000 times higher than the average background norm and 40 times the maximum permissible.

While Ukraine, Belarus and Russia saw the most contamination, Austria, Finland, Germany, Norway, Romania and Sweden saw contamination as well. The fallout even made it across the ocean to the North American continent. The total death toll is uncertain. The official death toll is 4,000 including the firemen and plant workers at the site as well as radiation burn victims. However, Greenpeace estimates the death toll to be over 200,000 for the population of Ukraine, Belarus, and Russia, and up to 6 million people globally. 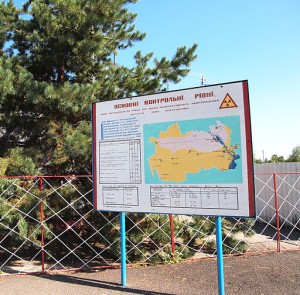 Sign near the control point of Chernobyl Exclusion Zone. By Tiia Monto (Own work) [CC-BY-SA-3.0 (http://creativecommons.org/licenses/by-sa/3.0)], via Wikimedia Commons

These days, Chernobyl, Pripyat and the surrounding area make up the Chernobyl Nuclear Power Plant Zone of Alienation, commonly known as the Chernobyl Exclusion Zone. Created shortly after the disaster, it’s grown to cover 1000 square miles around the plant. It’s estimated that less than 200 people live within the zone, with another 3000 working on containment and studies. The workers work either 4 days on and 3 days off, or 15 days on and 15 days off, and they’re monitored for exposure to radiation.

Not surprisingly, Chernobyl’s also become a tourist destination. The background radiation’s fallen to a much lower level (most of the radiation emitted right after the disaster was from short lived isotopes), and tourists as well as researchers are becoming more and more common.

Have we as a global society learned anything from the Chernobyl disaster? In the case of Europe, Chernobyl brought environmental and clean energy issues front and center as political issues in Germany and other European countries, as it did in the former Soviet bloc. I feel this was a primary motivation behind the solar energy explosion we’ve seen over the last few years in Germany, for example. 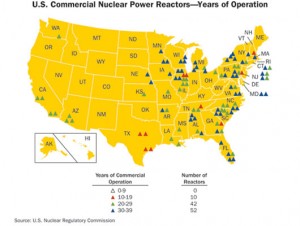 But, then there’s the other side. The current unrest in Ukraine is endangering the cleanup efforts at Chernobyl. We saw first hand what devastation a nuclear accident could cause, yet we still have nuclear power plants built on flood plains operating here in the U.S. We still have nuclear reactors on fault lines. We have many reactors operating near or past their original service life span estimates. And, we can’t forget the ongoing disaster at Fukushima.

When will we ever learn?