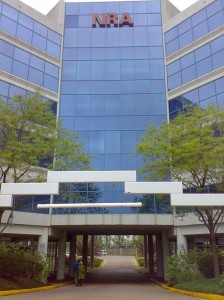 NRA Headquarters. By Bjoertvedt (Own work) [GFDL or CC-BY-3.0], via Wikimedia Commons

This last week, the National Rifle Association (NRA) held their annual convention in Indianapolis, IN. Attended by thousands and featuring speeches from the likes of Louisiana Gov. Bobby Jindal, Florida Sen. Marco Rubio, retired Lt. Col. Oliver North and former Alaska Gov. Sarah Palin. While we at Occupy World Writes think the dynamic four should be called a therapy group, we understand they drew substantial support from the crowds.

This follows Georgia’s new gun laws, the most liberal in the country, being signed into law this week. The new law, dubbed “the guns everywhere” law, places the burden of restriction inside public places such as bars and churches on the individual business, does not require the gun owner to carry permit papers with them, and even prevents police from inquiring about a permit unless the gun carrier has committed a crime. 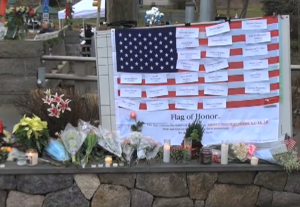 Flowers for those who died in the Sandy Hook shootings. By VOA (http://www.youtube.com/watch?v=XWCnbZaqP40) [Public domain], via Wikimedia Commons

But since it is because of gun violence, we can’t even talk about it. America has passed no federal gun restriction laws since 1993, when President Clinton signed the Brady Bill into law. Since then, we have had a few executive orders signed, the most recent by Pres. Obama in January of 2013 following the Newtown shootings. But there has been no congressional action on this issue, despite studies and reports proving the statistic of our children being slaughtered by 10,000 per year.

I am not an advocate of those who subscribe to the notion that all guns are bad. I hunt, I grew up with firearms and I understand the traditions most Americans cherish in that regard. But I also believe that parents should be able to send their children to school without wondering if they will come home that day. They should not hope someone starts making bullet-proof clothing for children. They should be able to count on their elected officials to respond when the nation faces the loss of our greatest national treasure.

Join Occupy World Writes in our support of Americans For Responsible Solutions. It is worth your time to at least explore and consider the topics presented on their website.

Go ahead – pull the trigger.