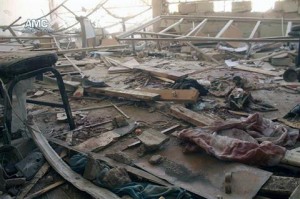 As President Bashar al-Assad prepares to run for his third term as Syria’s leader, the civilians of the war-torn country have little reprieve in their struggle for survival. A recent escalation of chemical weapon attacks in the northern regions and the area surrounding Damascus leaves  the government and the opposition forces pointing fingers at each other. Witnesses state that, without question, most all the attacks are carried out by the government, using their aircraft to drop the crude barrels of deadly chemicals on the helpless populations below.

Syria’s government missed a Dec. 31 deadline to remove the most dangerous chemicals in its stockpile and a Feb. 5 deadline to give up its entire stockpile of chemical weapons. Assad’s government cited security concerns and the lack of some equipment, but has repeated that it remains fully committed to the process.

“In Kfar Zeita, a rebel-held village in Hama province some 125 miles north of Damascus, a mid-April chemical attack remains unclear and likely won’t be known for some time. State-run Syrian television blamed members of the al-Qaida-linked Nusra Front rebel group for the attack, saying they used chlorine gas to kill two people and injure more than 100. It did not say how it confirmed chlorine was used. The TV report also claimed the Nusra Front is preparing for another chemical attack against the Wadi Deif area in the northern province of Idlib, as well as another area in Hama. The government station did not explain how it knew the Nusra Front’s plans,” reports from Associated Press state.

But on April 29, the government again attacked the innocent.

Children in Syria’s largest city found art to be a way to help them process the horrors they have witnessed as they struggle to make sense of life amidst civil war. Sharing these reflections with the community around them was seen as a step toward giving them normalcy and compassionate understanding. On Wednesday, they arranged their artwork for exhibition.

Their school was hit in a government airstrike in the opposition-held district of Aleppo, killing at least 19 people, including 10 children, activists have reported. The attack hit the Ein Jalout school in the eastern part of Aleppo. In an activist video the bodies of 10 of the 25 children killed were laid on the ground of a local hospital wrapped in sheets.

In a previous attack on August 30, 2013, “A playground full of children in northern Syria has been bombed by a fighter jet with a napalm-like substance, according to disturbing new footage captured by the BBC Panorama program. Eye witnesses described how a jet had passed the school in Aleppo numerous times, as if it searching for a target, before it dropped the bomb. At least 10 children were killed and many more were injured, according to the report from Ian Pannell and cameraman Darren Conway.

A large number of those who survived had burns to more than 50 per cent of their bodies, meaning that they were more likely than not to die as well. Both adults and children were filmed arriving at a basic hospital, with their clothes burned from their bodies and their skin coated in a white substance which the BBC said suggested the bomb contained something like napalm or thermite.

Though he refused to be identified in the report, the school’s headmaster spoke out about the terrible scenes. He said: “This was the most horrific thing. We have seen images on TV, we have heard many stories, but we have never seen anything like this before. The worst thing in life is watching someone die right in front of you and you can’t do anything. There were dead people, people burning and people running away, but where to? Where would they go? It is not safe anywhere. That is the fate of the Syrian people.” 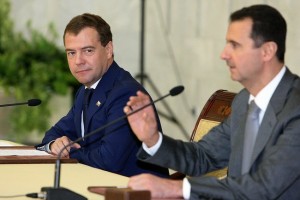 Currently, the United States supplies the Syrian people with $1.8 billion in humanitarian aid, and $500 million in non-lethal military aid (computers, food, etc.) to the rebel forces. And, as the CIA is in charge of lethal military aid to the rebels (weapons and training are the extent that they’ll publicly admit to), we don’t have any estimate as to how much the U.S. is actually spending in direct military aid.

The Russians, on the other hand, have sold an estimated $1.6 billion in arms to the Assad regime; 10% of the total of Russian arms sales on the global market. With this kind of money and aid pouring in, what incentive does Assad have to end this conflict?

Occupy World Writes calls on the international community to recognize that the continued pummeling of Syria by the country’s government can be seen as nothing but acts of terrorism. Targeting children, women, elderly and innocent civilians to exert an atmosphere of terror is the definition, and Assad clearly has crossed that line.

The US State Department has clearly stated “The United States does not negotiate with terrorists.” Any questions?