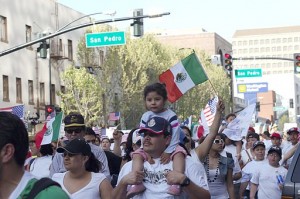 Yesterday, it was the first of May. And, as with every May 1 I can remember, there were marches, celebrations and protests around the world. But, why May 1? What makes that day so special to workers and other activists?

The year was 1884. That summer, the Federation of Organized Trades and Labor Unions called for May 1, 1886 to be the start of a national movement calling for the establishment of an eight hour working day. Eight hour days were already Federal law, but neither Federal or various state governments were enforcing it. In Illinois, this meant that employers were forcing workers to sign waivers of the law as a condition of employment.

On May 1, 1886, the demonstrations started. Chicago with its large workers movement had the biggest demonstration the first day, with 80,000 workers marching up Michigan Avenue carrying union banners. The solidarity shown by the workers made some employers start to fear a workers revolt, while others quickly offered their workers a shorter working day and other concessions. On May 2, there was a smaller but still peaceful march of about 35,000 workers. Then, came May 3.

On May 3, the Chicago police attacked picketing workers outside the McCormick Reaper Works. Four workers were killed and many others were injured as the police drove away the striking workers and protected strikebreakers. Labor leaders and activists called for a rally to happen the next day, May 4, at Haymarket Square. 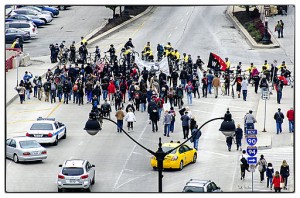 May Day 2012 at the Haymarket Riot Memorial. By Seth Anderson from Chicago, us (Occupy Barrier Uploaded by Ralgis) [CC-BY-SA-2.0 (http://creativecommons.org/licenses/by-sa/2.0)], via Wikimedia Commons

The next day, 2500 workers showed up, as did Chicago Mayor Carter Harrison, who attended as an observer. As the rally went on, which Mayor Harrison described as peaceful, the crowd began to depart as it began to rain. Then, when there were only two hundred protesters remaining, 176 policemen showed up with rifles. Somebody (their identity unknown) threw a bomb at the police. The police responded by opening fire. Seven policemen were killed. The body count among the protesters is less documented; I’ve seen estimates anywhere from four to eight dead and 30 to 40 injured to an unknown number dead and hundreds more injured.

The next day, martial law was declared not only in Chicago, but throughout the nation. Anti-labor governments all over the world used the events in Chicago as an excuse to crush unions. In Chicago, the police used the Haymarket Riot as justification to round up labor leaders and radical elements, while the corporate owned newspapers cheered the prosecution of “bomb makers” and “red ruffians.”

Eight people were put on trial for being “instigators”; all of them labeled by the prosecution and the press as being “anarchists.” The following “trial” was a mockery of the justice system, with the Chicago Tribune offering to pay the jury if the defendants were found guilty being a prime example of the bias exhibited throughout the trial. On August 26, 1886, the jury found all eight guilty, even though many of the defendants were not present at the Haymarket Riot, and their alleged involvement was never proven. Seven of them received the death sentence, and the other received a 15 year prison sentence.

On November 11, 1887, four of the defendants were hung, and one had committed suicide the night before. The remaining two with death sentences had their sentences commuted to life in prison, and in 1893 all of the surviving defendants were pardoned by Governor John P. Altgeld, who then went on record condemning the whole legal system which had let this happen. 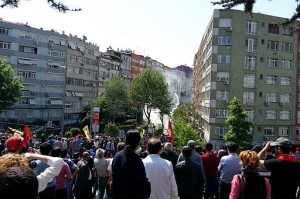 In 1889, a delegate from what was by then known as the American Federation of Labor (formerly the Federation of Organized Trades and Labor Unions mentioned above) recommended at an international labor conference in Paris that May 1 be set aside as International Labor Day in memory of the Haymarket incident and the travesty of justice that followed.

So, what happened this year? In Turkey, 51 people were hurt and 138 arrested as police and protesters clashed in Istanbul. At least five people were injured in Phnom Penh, Cambodia during protests calling for, among other things, the overturning of a law outlawing such protests. Police clashed with protesters in many other cities, including Hamburg, Germany and here in the United States, Seattle. In others, there were peaceful (or semi peaceful) marches; an estimated 100,000 showed up in Red Square for the first large May Day celebration in Russia since the Soviet era, and there were events in New York, Los Angeles, San Francisco; practically every major city across the globe had some event today.

We at Occupy World Writes stand in solidarity with workers around the globe. May this year bring us closer to equality and opportunity for all.