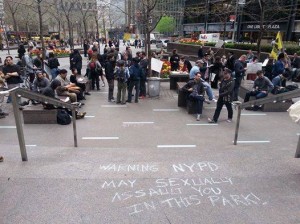 On May 5, Cecily McMillan was found guilty of second degree assault for defending herself when a policeman sexually assaulted her. She is being held without bail until her sentencing hearing.

I don’t even know how to begin to express my shock and outrage over both the way the trial was conducted and the verdict. Judge Ronald Zweibel “consistently ruled that any larger context of what was happening around McMillan at the time of the arrest (let alone Bovell’s own history of violence) was irrelevant to the scope of the trial,” stated The Guardian’s Molly Knefel. The jury was never told about the police violence in Zucotti Park that night; they didn’t hear about the police violence when the park was first cleared; they never heard about the violence aimed at the Occupy movement at all, because Zweibel had deemed it “irrelevant”.

The police testimony was considered golden; the physical evidence against the police as fallible by the jury. The prosecution questioned whether or not Cecily’s injuries were caused by the police, while downplaying the fact that the plaintiff, Officer Grantley Bovell, repeatedly identified the wrong eye when testifying as to how Cecily injured him. Officer Bovell had a documented history of violent behavior- irrelevant said Zweibel. The other allegations of violent behavior by him the same night Cecily was arrested? You guessed it- irrelevant. 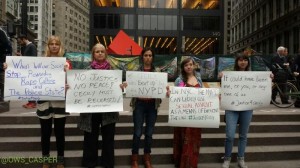 On the #Justice4Cecily Facebook page, the defense team states “We are devastated by the Jury’s verdict today. It has been clear from day one that Cecily has not received a fair and open trial.” And, Cecily’s mother speaks as only a mother can: “… Today, lady Justice, you have failed my daughter and removed a bit of the light from her eyes. It’s is not acceptable! However, she will continue to survive #1 cause she is made of sterner stuff and #2 cause that who I in the hell raised her to be!!” 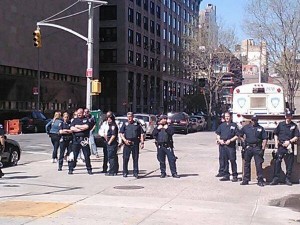 NYPD outside courthouse after Cecily McMillan verdict. Photo by Virginia Simson via Facebook

Molly Knefel finishes her article with a powerful statement: “It’s why #myNYPD shocked enough people to make the papers – because it wasn’t one bruised or broken civilian body or one cop with a documented history of violence. Instead, it was one after another after another, a collage that presented a more comprehensive picture – one of exceptionally unexceptional violence that most of America has already accepted.”

This is the crime we’re all guilty of. We don’t hold the people who enforce our laws accountable when they themselves violate the same laws. We hear every day about police brutality in our communities, of police thinking that they’re above the law that they’re supposed to enforce. We can’t let this go on any longer.

For information on how to support Cecily in the times ahead, please visit justiceforcecily.com

Editorial Note from MNgranny: Occupy World Writes can not help but gasp at the realization that this sets the dangerous precedent for women: If you are sexually assaulted by a police officer and you choose to defend yourself as a woman, you could face felony charges and up to seven years in prison. As a felon, you lose your right to vote after serving your sentence, and you are economically disadvantaged because employers are reluctant to hire convicted felons.

Welcome to the further oppression of women in a country that “practices” equality. Maybe someday we’ll get serious about it.