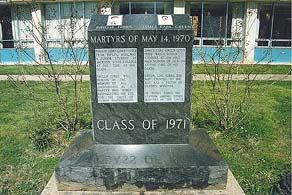 The month of May, 1970 marked a turbulent time in American history, and nowhere was this more evident than on the college campuses. The Kent State massacre was the main incident that got national attention, but there were others that slipped under the radar. On May 8, I discussed the UNM protests where eight people were bayoneted by the National Guard. Today marks another event, which while better known than the UNM incident, still was basically not covered by the national media at the time, and still is unknown to many people.

In the days after Kent State, there were demonstrations and protests at colleges and universities across the nation. Jackson State College (now Jackson State University) – a historically black college in Jackson, Mississippi – was no exception. And, with this being the deep South of that time, racial tension was always present.

On the night of May 14, 1970, about 100 students gathered along a street running through the campus. There had been protests earlier that week about the war in Cambodia and over white motorists driving through the campus taunting black students, but there wasn’t any formal protest that evening. What happened next isn’t clear. Some motorists report having rocks thrown at them as they drove down the streets, and some people overturned cars and set fires. however, it’s unclear if these people were students or not. 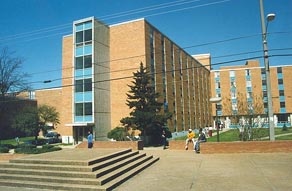 Alexander Hall on the Jackson State campus where police fired on unarmed students in front of the dorm and inside the dorm. Photo by Mike (www.may41970.com)

Shortly after midnight (May 15), a bottle was thrown at the police, who responded by opening fire. Over 140 shots (some reports say as many as 400) were fired at the dorm in 30 seconds by at least 40 state patrolmen. Two people were killed (one a high school student who was walking through campus), and a dozen more were injured. Every window in the dorm facing the street was shattered by gunfire.

No charges were ever brought against the police. Some officers claimed that a sniper had fired first; the FBI in a later investigation found no evidence to support their claim. A local grand jury placed the blame on the students saying that “when people engage in civil disorder and riots, they must expect to be injured or killed when law enforcement officers are required to establish order.”

The President’s Commission on Campus Unrest (also known as the Scranton Committee) concluded that “that the 28-second fusillade from police officers was an unreasonable, unjustified overreaction…A broad barrage of gunfire in response to reported and unconfirmed sniper fire is never warranted.”

Why didn’t this get the coverage that Kent State did? Unfortunately, it’s safe to say it’s more than likely because they were black youth in the South, and not youth from middle class homes in white America. Would the same difference in coverage happen if both shootings were to happen in 2014? Unfortunately, yes again.

Racism is far from being dead in America. The election of the first black President was supposed to be the sign that we’ve grown past racism in our society; instead, it’s brought all the bigots and racists out of the woodwork.

We must become better than this…