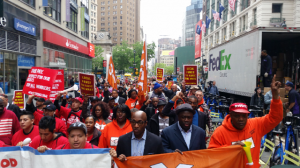 Fast food workers on strike in New York City on May 15. Photo courtesy US Uncut via Facebook

Over the last eighteen months here in the United States, we’ve seen numerous one day strikes by workers in the fast food and retail businesses. Starting with the original strikes at various Wal-Marts and the New York City fast food workers walkout of November 2012, the movement for a living wage has steadily grown. We’ve seen the rise of the FF15 (Fight For $15) campaign spread from city to city across the nation, along with demands to be able to unionize.

Yesterday, fast food workers in 150 cities in the United States and 80 other cities around the world went on a one day strike with support from the Service Employees International Union (SEIU) here and the International Union of Food, Agricultural, Hotel, Restaurant, Catering, Tobacco and Allied Workers’ Associations (IUF) abroad. The demands were simple- a raise to a $15 per hour minimum wage and the right to organize. 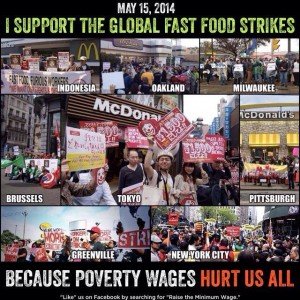 While some industry observers are saying that an immediate jump to $15 an hour is highly unlikely and claim that it would be too big of a jolt to business or that it would lead to higher unemployment, and spokespeople for the restaurant trade groups call the protests “made-for-TV media moments,” there isn’t much doubt that we’re seeing the rebirth of the labor movement in this country- and it’s about time.

If the Occupy movement has accomplished nothing else, it’s made the issue of income inequality a much discussed topic both here and abroad. In the last three years, we’ve seen the topic go from being discussed by economists and activists and being ignored by everybody else to being the subject of the best-selling book on Amazon.com.

Occupy World Writes stands in solidarity with all who went on strike yesterday, and with all who believe that everybody who works full time should earn a living wage for their labor. And, as more and more people around the world join in the fight against income inequality, I can’t help but think of the McDonalds jingle…