On this day sixty years ago, the modern civil rights movement was born. In a unaminous decision, the United States Supreme Court stated that “We conclude that in the field of public education the doctrine of ‘separate but equal’ has no place. Separate educational facilities are inherently unequal. . .”

The case, Brown v Board of Education, was actually five cases: Brown v. Board of Education of Topeka, Briggs v. Elliot, Davis v. Board of Education of Prince Edward County (VA.), Boiling v. Sharpe, and Gebhart v. Ethel. While separate cases, they all dealt with the same issue; the constitutionality of state-sponsored segregation in public schools. After a three judge panel of the U. S. District Court that had heard the individual cases had ruled in favor of the respective school boards citing Plessy v Ferguson as precedent, the plaintiffs appealed to the Supreme Court, who combined the cases. 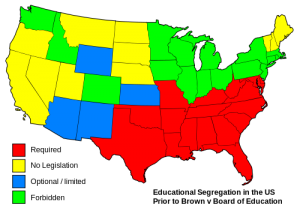 Plessy v Ferguson was an 1896 case dealing with Homer Plessy, a Louisiana man who was 7/8 white and 1/8 black, who was arrested for sitting in a “whites only” railway car instead of sitting in the “coloreds only” car. Plessy took the railroad to court for violating the 13th and 14th Amendments in  Homer Adolph Plessy v. The State of Louisiana. However, Judge John Howard Ferguson ruled that Louisiana had the right to regulate railroads within the state boundaries. Plessy appealed the ruling first to the Louisiana Supreme Court, and then the U.S. Supreme Court. The court upheld Ferguson’s ruling, stating that, considering the accommodations in the two cars were equivalent; “We consider the underlying fallacy of the plaintiff’s argument to consist in the assumption that the enforced separation of the two races stamps the colored race with a badge of inferiority. If this be so, it is not by reason of anything found in the act, but solely because the colored race chooses to put that construction upon it.”

Brown v Board of Education reversed the Plessy decision, at least in regards to education. This set the stage for other challenges to Jim Crow laws throughout the South. The modern civil rights era had begun.

Unfortunately, we seem to be moving backwards since the Brown decision. I wrote a piece a couple weeks ago on how segregated schools are becoming the norm again in some areas. It’s a very disturbing trend that can only lead to more educational inequality unless we stop it soon.