On May 16, Lisa Monaco, the Assistant to the President for Homeland Security and Counterterrorism (the President’s chief counterterrorism advisor), sent a letter to the deans of 12 public health schools. The letter, a copy of which was obtained by Yahoo News, says: “I wanted to inform you that the Director of the Central Intelligence Agency (CIA) directed in August 2013 that the agency make no operational use of vaccination programs, which includes vaccination workers. Similarly, the Agency will not seek to obtain or exploit DNA or other genetic material acquired through such programs. This CIA policy applies worldwide and to U.S. and non-U.S. persons alike.” The letter was written in response to concerns about the use of public-heath programs in covert operations. But, why the concerns?

In July of 2011, The Guardian reported that the CIA had organized a fake vaccination campaign in order to collect DNA samples from residents in Abbottabad, Pakistan to determine whether members of Osama bin Laden’s family were living there. The CIA had come up with the idea after American intelligence officers had tracked an Al Queda courier, Abu Ahmad al-Kuwaiti, to the bin Laden compound the summer before. They even recruited a Pakistani health official, Shakil Afridi, to act as an organizer for the fake vaccination campaign.

Afridi went to Abbottabad in March of 2011, saying he had funding to give free vaccinations for hepatitis B. He went around the normal bureaucracy and directly hired local health workers, who had no idea about the CIA search for bin Laden. He started in a poor neighborhood, and the next month instead of giving the second dose of the vaccine (hepatitis B vaccine is usually administered in three doses), he went on to the neighborhood where bin Laden lived. One of the nurses managed to gain access to the bin Laden compound. We don’t know what information, if any, was gained by the nurse. 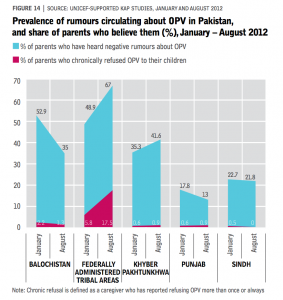 Pakistani intelligence found out about the fake vaccination campaign while they were investigating the raid by the U.S. on the compound. Afridi was arrested. This also led to the Taliban targeting immunization workers, reportedly killing 56 people between December 2012 and May 2014. This number includes police officers sent to guard the workers. The Taliban normally portrays vaccination drives as a Western plot to sterilize Muslim children or as a cover for spies, so the CIA action played straight into the population’s fears. Vaccination rates, not that good to begin with, sank even lower, with the Taliban banning outright vaccinations in parts of Pakistan.

Then, polio started making a resurgence. Of the 77 new cases of polio reported so far this year, 61 of them were from Pakistan, mostly from the Federally Administered Tribal Areas (FATA) region, a Taliban stronghold. I myself know of the horrors of polio first hand; my dad had polio when he was a teenager. Though he came through it much better than some did, he was still partially crippled by it. My dad was a big man; 6’1′ and 210 pounds in his prime, yet his right leg was skinnier than my arm, and I’m not a big man. The possibility of this spreading should be of concern to all of us.

Pakistan’s set up emergency mandatory polio immunization at its international airports and various health organizations have made sure health care clinics outside the FATA area are well stocked with polio vaccines, and they’re making an effort to vaccinate children crossing the Pakistan/Afghanistan border. However, they’d have a much easier time if the CIA hadn’t done what they had in Abbottabad.

We’re seeing the blowback in our own country as well. The fear of vaccination as a government control mechanism has been commonplace on the fringes of the conservative movement since the birth of the John Birch Society. And, with the conservative movement’s shift to the right over the last thirty years, such views are becoming more mainstream, and they cite the Pakistan incident as a reason for their beliefs. Hence, we’ve seen an increasing number of cases of diseases such as measles, which were thought to have been eradicated in this country.

OWW calls on all governments to never play games with their citizens’ (or citizens in other countries’) health for political gain or otherwise. Eradicating such scourges as polio takes a worldwide effort, and only by our governments cooperating with each other will we be able to do so.