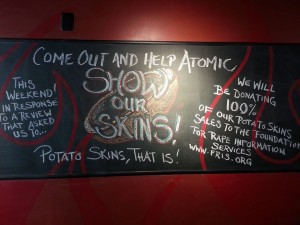 Rape culture is one of the biggest human rights issues facing us. It’s a global problem, and we see stories in the news every day where rape culture and the sexism that fosters it bring tragedy into women’s lives. MNgranny’s written numerous articles about it and the impact on society, and sometimes we despair of ever having good news in the war on those attitudes. But, today we have one piece of good news.

Atomic Grill is a barbecue restaurant in Morgantown, West Virginia. Recently, a customer had left a review on UrbanSpoon requesting that the staff “show more skin.” The review singled out one server in particular and “got a little obsessive, a little creepy,” to the point where coworkers would escort her out to her car when she left work, according to Daniel McCawley, Atomic Grill’s owner.  “I’m a father and a husband, I’ve got five sisters,” he said. “So this sort of thing hit home especially hard for me.”

Daniel’s response was brilliant, and hopefully will serve as a model for others. From now through the Memorial day weekend, Atomic Grill will be featuring a $7 potato skins special, asking customers to “Come out and help Atomic show our skins! Potato skins, that is!”

All of the profits from the special will be donated to the West Virginia Foundation for Rape Information Services. McCawley explains that the organization does much for women’s rights in West Virginia, and said; “We’ve got to put our money where our mouth is.”

The response has been overwhelming, with support coming in from all over the world. For example, one lady in Oregon has donated money so that the staff could hand out potato skins to whoever walked in.

Occupy World Writes applauds Mr. McCawley for his concern for his employees, and for his brilliant response to a boorish customer. We also encourage you to like Atomic Grill on Facebook. We hope that both his feelings and his actions inspire others to stand up to sexism and rape culture in their communities.