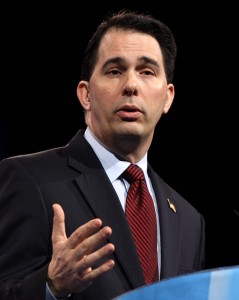 Earlier this month, I wrote about my crazy neighbors across the river in Wisconsin. One of the “stars” of that piece was Governor Scott Walker. Scott’s had a rather interesting term as Governor; he’s survived a recall election and has had numerous investigations of his campaign and administration.

On May 6,  Judge Rudolph Randa of the U.S. District Court for the Eastern District of Wisconsin ordered prosecutors to stop their investigation into the campaign spending and fundraising activities of Walker, the Wisconsin Club for Growth and other conservative groups immediately. The investigations were trying to discover if the Walker campaign and the conservative groups had illegally coordinated campaign strategies during the 2011 and 2012 recall elections in Wisconsin.

In his ruling, he told prosecutors to return all of the property seized during their investigation and to destroy copies of documents they obtained during their searches.The next day, the 7th U.S. Circuit Court of Appeals stayed Randa’s order, ruling that he had overstepped his authority when he ordered the destruction of the documents. On May 8, Randa reissued his order, saying that the appeal was “frivolous” and at one point “the height of frivolousness.” The Circuit Court of Appeals responded by putting a stay on any destroying of documents.

On May 9, the Wisconsin State Journal disclosed that one of the judge’s assistants was married to a lawyer for the Walker campaign. Geoffrey Hazard, an expert on judicial ethics, stated that Randa wasn’t required to recuse himself from the case, “but it raises a question of prudence.”

Yesterday, the Center for Media and Democracy reported that Judge Randa attended privately-funded, all-expenses-paid judicial seminars put on by George Mason University in 2006, 2008, 2010 and 2012. The seminars basically are privately-funded all-expenses paid trips for judges, with conference sponsors picking up the costs of a judge’s flights, hotel rooms, and meals.

The conflicts of interest are stunning. First the assistant married to a Walker campaign lawyer, and now this. But, this is business as usual in Scott Walker’s Wisconsin. This will be one worth watching…