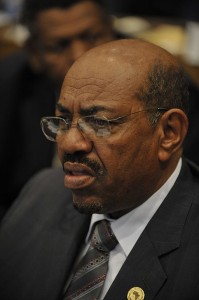 By now, you’re more than likely aware of Meriam Yehya Ibrahim’s story. A Sudanese Christian, she was sentenced by a Sudanese court to death for apostasy and 100 lashes for adultery. I wrote a piece last week that told her story up until that time. However, it’s been a busy week since then.

First of all, she gave birth to her daughter Maya on Tuesday. This means she has two children in prison with her; her 20 month old son and her newborn daughter. This also started the clock ticking as far as her execution goes, as the death sentence was stayed for two years after her new child was born to allow time for Maya to be weaned.

Yesterday, both the BBC and Reuters ran stories saying that Foreign Ministry Under-Secretary Abdelah Al-Azrak had told each of them that Meriam would be freed “in a few days.” The BBC story claimed that Al-Azrak had said that Sudan guaranteed religious freedom and was committed to protecting the woman. The Reuters story had a different, direct quote from Al-Azrak: “The related authorities in the country are working to release Mariam (Yahya Ibrahim), who was sentenced to death for apostasy, through legal measures,.. I expect her to be released soon.”

Meanwhile, her lawyer, Mohaned Mostafa, said that neither he or Meriam’s husband had heard anything about the release. Furthermore, the Sudan Tribune ran a story in which Abu Bakr al-Sideeg al-Amin, a Sudanese Foreign Ministry spokesperson, made a statement to CNN denying Al-Azrak’s statement, and said he is unaware of any plans to release Meriam “before a ruling from an appeals court.”

Once again, Occupy World Writes calls on the Sudanese government to drop all charges and release Meriam, her daughter and her son immediately. And, once again, we furthermore call on all governments, religions, churches and people to stop discriminating against, hating, prosecuting and/or killing people who are different from you in the name of whatever God you claim to believe in.