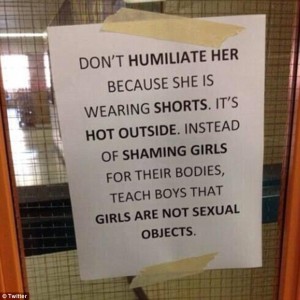 Last week, between 20 and 30 teenage girls in the Labrador and Newfoundland provinces of Canada were sent home from school for wearing sleeveless shirts that exposed their bra straps. Emily Connors, one of the girls, told CBC News that the girls were told it was “because of our bra straps, and that it was inappropriate because some of the male teachers, and male students found it distracting for them.” Other students told the National Post that the school stated that their bare shoulders could “invite unneeded attention” from male students because “boys will be boys.”

It’s been unseasonably warm in Canada this spring, and the girls were dressing this way to be comfortable. And, they aren’t the only ones to get this response. In another example from last week, Lindsey Stocker, a 15 year old Quebec student, was told to change her shorts after the school decided they were too short. Lindsey described the incident; “In front of all my peers and my teacher they said I had to change. And when I said no they said I was making a bad choice. They kept shaking their heads. In front of everybody.”

“They continued to tell me would be suspended if I didn’t start following the rules. When I told them I didn’t understand why I had to change they told me that it doesn’t matter – I don’t have to understand the rules, I just have to comply by them. She also claims that the rules were meant to  “target girls,” and that school officials “don’t really care what guys wear.”

And, the Canadians aren’t alone. In this country, a Virginia girl was kicked out of the Richmond Homeschool Prom because her dress was causing “impure thoughts” among the boys and male chaperones. In Evanston, Illinois, the Haven Middle School banned girls from wearing leggings, shorts and yoga pants because they’re “too distracting” for the boys. Then, there was the Utah school (Wasatch High School), that photoshopped girls’ yearbook pictures so it looked as if they had higher necklines and longer sleeves than they actually did.

Occupy World Writes rejects these schools’ rationales for their actions. The idea that boys or men can’t control themselves and that it’s up to the girls or women to prevent this is repugnant, and propagates the rape culture so prevalent in today’s society. We’ll let Lindsey Stoker speak for us, via a poster that she posted in numerous locations in her school:

“Don’t humiliate her because she’s wearing shorts. It’s hot outside. Instead of shaming girls for their bodies, teach boys that girls are not sexual objects.”