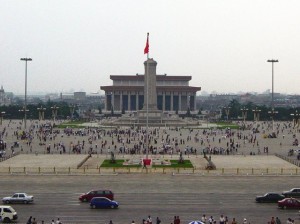 25 years ago today, the world watched in horror as CNN reporters told of the Chinese army opening fire on unarmed protesters in Tiananmen Square. This was the first time that a popular uprising was broadcast around the globe; the beginning of the now common coverage of revolutions and uprisings we’ve become accustomed to. But, what about the backstory? What led to the events of the night of June 3 and morning of June 4?

On April 15 of that year, Hu Yaobang died. Formerly the General Secretary of the Communist Party, The day after Hu’s death, thousands of university students gathered at Tiananmen Square to mourn his passing and called for government accountability, freedom of the press, freedom of speech, and the restoration of workers’ control over industry. The next week, 100,000 marched to the Square in defiance of the authorities to watch the live broadcast of Hu’s funeral.

On April 22, rioting broke out in the cities of Changsha and Xi’an, with 350 being arrested. On April 23, the Beijing Students’ Autonomous Federation called for a student strike at Beijing universities. In Wuhan, students protested against the provincial government. The General Secretary of the Communist Party,

On April 26, People’s Daily (the official party newspaper) had a front page editorial calling the student movement an anti-government, anti-party revolt. Meant to scare the students into submission, it had the opposite effect. On April 27, 50,000 to 100,000 students marched to the Square, prompting the government to make slight concessions. On May 4, 100,000 students again marched to the square, and afterwards, the universities opened again.

On May 13, two days before Mikhail Gorbachev was to come to Beijing for a state visit, students started a hunger strike in the Square. As the welcoming ceremony for Gorbachev was to be held in the Square, the students hoped to use it as a bargaining chip with the government. By the afternoon, there were 300,000 students in the Square; the welcoming ceremony was moved to the airport. On May 17, over a million people demonstrated in the Square. On May 20, martial law was declared in Beijing, with 250,000 troops eventually being in Beijing. But, the army was stopped by the protesters, and retreated to bases around the city on May 24.

On June 2, Premier Deng Xiaoping and the remaining members of the Politburo (two had been ousted in May) agreed to clear the Square so that “the riot can be halted and order be restored to the Capital.” While acknowledging the need for clearing the Square as peacefully as possible, They authorized the troops to use force if the protesters didn’t cooperate. The rest is well known.

Yesterday, foreign ministry spokesman Hong Lei told reporters: “The Chinese government long ago reached a conclusion about the political turmoil at the end of the 1980s, In the last three decades and more of reform and opening up, China’s enormous achievements in social and economic development have received worldwide attention. The building of democracy and the rule of law have continued to be perfected.”

But, while living standards have been dramatically improved, the suppression of protest has increased, if anything. The Chinese leaders haven’t forgotten what happened 25 years ago, and are quick to break up any movements, as well as keep an eye on dissidents. Social media such as Facebook is banned, and the government has tight control over the Internet in China. The government’s as corrupt as ever, and power’s in the hands of a very few.

There are protests – some estimate as many as 200,000 of over 50 people every year – but the local authorities are quick to quell them. And, the government still has enormous control over all forms of media.

Occupy World Writes remembers the events of 25 years ago at Tiananmen Square. We remember the courage exemplified in the famous picture of the lone student facing down the tanks in the Square. We remember the carnage – and we remember the hope. We call on the Chinese government to allow its citizens free access to the outside world, and to open a true dialog with the people it’s supposed to be serving. Only then will China be capable of being all it can be.