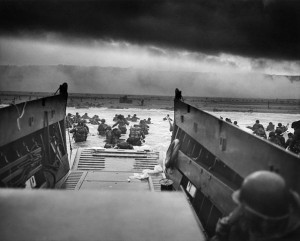 Seventy years ago today, 160,000 American, British and Canadian troops landed on the beach at Normandy. On this, the first day of the largest seaborne invasion in history, the Allied forces suffered at least 12,000 casualties with 4,414 confirmed dead. And, while they didn’t achieve all the goals they had set for that day, they had established a firm beachead for future operations, By the end of the month, 875,000 troops will have landed in Normandy, Seven weeks after the initial landing, Operation Cobra broke through the German lines and secured northwestern France for the Allies.

When I was young, D-Day was more remembered than it is today for the most part. I was born ten years after the war had ended, and many people who I knew had been part of the landings. They came home after the war and went to school, bought a house or started a business with GI loans given to them by a grateful country. Others had served in Korea, and did the same as the returning WWII veterans. We were a country well acquainted with the horrors of war, and we realized the debt we owed to those who fought them for us.

These days, there’s hardly a mention of D-Day most years; maybe a fifteen minute segment on the evening news, and a couple filler stories during the day. Today is different in that regard, due to it being it’s the 70th anniversary. There’s ceremonies in Normandy, and media crews from all over the world. For this day, we put the few veterans left who were there that day on a pedestal, and honor them and the ones they served with. Then, the ceremonies are over, and the TV cameras are gone, and everybody settles into their normal routine with a feeling oh “Yes, we paid honor to those who served.”

Meanwhile, 22 veterans commit suicide every day; a majority of them having served in Vietnam, a conflict with which some of the more debilitating effects on veterans are finally covered by the VA 40 years after the war ended. Many of our veterans come home disabled from our recent wars in Iraq and Afghanistan. More and more veterans and their families need assistance such as food stamps to get by in today’s America. The unemployment rate for recent veterans runs at least three percentage points above the national average. The VA is understaffed, underfunded and overwhelmed by the number of cases, and thus is a bureaucratic nightmare. Yet, we have those in our government who are happy to send our young men and women off to war, yet are adamant against paying our side of the bargain we made with them when they went off to fight for us.

On this D-Day, Occupy World Writes remembers all our veterans, and salutes them. We realize the enormous debt each of us owes to them, and we will continue to fight for the benefits they’ve earned by their service.