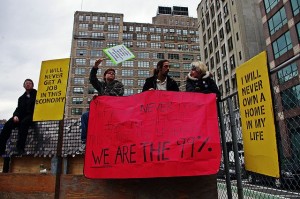 Photo by David Shankbone (own work) via Wikimedia Commons

Yesterday (June 10), lawyers for fourteen Occupy Wall Street protesters announced that New York City had agreed to pay $583,000 in a settlement over their arrest during a march on January 1, 2012. The attorneys for the plaintiffs said this was the largest single settlement related to Occupy Wall Street.

The protesters were arrested and charged with blocking traffic. The protesters claimed that they were surrounded, and weren’t given a chance to disperse. Manhattan prosecutors, as has been the case with the majority of the over 2,600 arrests of Occupy wall Street protesters over several months after the beginning of the movement in 2011, declined to prosecute. The protesters sued for false arrest.

Wylie Stecklow, the lead plaintiffs’ lawyer on the case, said in the statement: “This systematic false arrest and misconduct by high-ranking (New York Police Department) officers is a symptom of an institutional practice of chilling expressive-speech activity and suppressing protest in New York City,” He went on to say: “In this case and many others, we have seen that the police do not understand the rights afforded individuals under the Constitution, especially with respect to expressive speech activity. Our hope is that this is the starting point for police retraining.”

David Thompson, another attorney for the plaintiffs, said:  “The mass arrest of non-violent protesters has no place in any democracy. The NYPD pursued a policy of arresting thousands of people who had done nothing wrong, I hope that the resolution of this lawsuit will show that the NYPD policy must change. It is my hope that this case and others like it will free our streets and parks for peaceful protest.”

Other lawsuits are pending, including a class-action claim stemming from the arrests of about 700 people while they marched on the Brooklyn Bridge roadway on Oct. 1, 2011.

Occupy World Writes congratulates our brothers and sisters in New York City. We hope this sets precedent for the other lawsuits, and that the police nationwide has had a much needed learning moment.

We will exercise our right to free speech, and we will hold the police liable if they unlawfully interfere with us doing so. We will be heard.