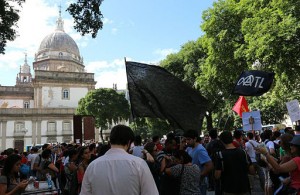 In late 2007, it was announced that Brazil would be the host nation for the 2014 World Cup. At that time, Brazil had planned to set aside about $1 billion to update their stadiums. However, of the 18 existing stadiums that could handle the crowds, four would have to be rebuilt from scratch, and all the others needed serious work.

At first, the Brazilian people were happy and excited by the news. As time went on though, problems began to appear. When the Brazilian government realized that the promised private sector money they were expecting to cover most of the costs would not even cover “half a stadium,” they covered the financing themselves.

The estimated $1 billion grew to more than $11 billion. Corruption ran rampant, and the cost overruns on the stadiums alone were 300% over the original estimates. Meanwhile, the public services such as transportation, health care and education, poor as they were, were neglected. Add to this 250,000 people (1.25% of the country’s population) being evicted from their homes to allow construction and expansion of the stadiums, and you have a recipe for social unrest. 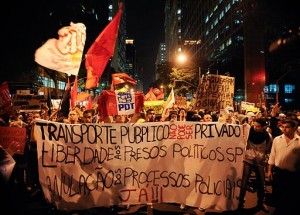 The protests started last June during the FIFA Confederations Cup. The Confederations Cup is held the year before the World Cup and is looked at as a “dress rehearsal” for the larger event. More than one million people took part in the protests last year, mostly protesting against the fact that Brazil was hosting the World Cup (as well as the 2016 Olympics, as they’ll be held in Rio de Janeiro), yet failed to invest in the people’s welfare.

Unfortunately, the protests haven’t been completely peaceful. Since May, there’s been clashes with the police in various protests across the country. There’s also a Black Bloc contingent who claims that non-violent protest won’t do any good. On Thursday, an AP reporter and two CNN reporters were injured covering the protests in Sao Paulo.

The past couple weeks, besides the protests, have seen strikes by the Sao Paulo subway workers, local police and a threatened federal police strike, which was averted by offering them a 16% raise.  The Homeless Workers Movement had occupied a piece of land near the Sao Paulo stadium since May, demanding that the privately held land be given over to low income housing for the people evicted by the work on the stadium; officials agreed to the demand.

Now, Brazil’s made lots of progress through minimum wage raises and the like. For example, a program called Bolsa Família gives financial support to poor mothers.  In return, they have to ensure that their children go to school and avail themselves of health care services. The quality of life has improved, BUT the income inequality is still staggering. Although it’s steadily fallen over the last eleven years, Brazil is one of the worst three countries as far as income inequality goes. The taxes are crippling; sales taxes can add an additional 80% to an item’s price. And, like any taxes like that, they affect the lower and middle incomes much more than the high income people.

However, even 15-20% pay raises don’t do much with goods being taxed at rates up to 80%. The police violence in the name of “keeping order” in the favelas is infamous. The common person, while better off than he or she was a few years ago, still have a horrible social service infrastructure; 27% of adults between the ages of 15 and 64 have only rudimentary reading and writing skills, for example. And, with the Olympics coming up in two years, the spending for events that don’t benefit the common person at all will more than likely stay at an outrageously high level.

Occupy World Writes deplores the violence on both sides. While we are in firm agreement with the desire for better schools, etc. (and who wouldn’t be?), we firmly reject the idea that violence is either necessary or desirable. We call on the Brazilian government and all other governments to put the people before gaudy events meant to promote the country’s image. After all, what’s a better way to promote your country and its way of life than having happy, healthy, well educated people?