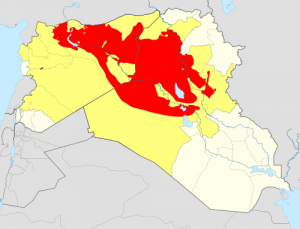 The news out of Iraq has been grim recently. The extremist group known as either ISIS (Islamic State of Iraq and Syria) or ISIL (Islamic State of Iraq and the Levant) has been on a rampage through northern Iraq. The campaign is mostly seen by us in the west as a religious war; Sunni extremists (ISIS) against the Shia population (the Iraqis), and indeed the news out of the region seems to underline that theory, with executions of Shia citizens and other atrocities committed by ISIS becoming commonplace news stories. But, is it really that simple?

The two big players in Mideast politics are Saudi Arabia and Iran. And, while it’s true that Saudi Arabia is mostly Sunni and Iran mostly Shia, this isn’t what drives the hostility between the two countries. Both of them are large oil producers and anxious to expand their power and influence upon the region. The US had an ally in Mohammad Reza Shah Pahlavi (the Shah of Iran), which was to be expected as the CIA and MI6 were behind the coup in 1953 that put the Shah in power. With the Shah in power, the government was secular in nature, as well as being brutal, corrupt, and in the eyes of the more religious conservatives, Westernized, The Shah in turn was overthrown in the 1979 Revolution, which made Iran an Islamic state. As Iran cut its ties to the West, the power struggle between the Iranians and the Saudis grew.

At the same time that the Islamic state was being put into place in Iran, Saddam Hussein formally took power in Iraq. Shortly after Saddam came to power, he invaded Iran with the support of the U.S., Europe and the Arab states. The war dragged on for eight long years. Here is where we first saw Iraq use chemical weapons; weapons supplied by the Germans and the Reagan administration. During the end of the war, the Iraqi government launched a campaign against the Kurdish regions in Iraq, attacking them with chemical agents and then blaming the attacks on Iran (as did the U.S.). It’s estimated that between 50,000 and 100,000 people were killed, with some Kurdish sources saying as many as 180,000.

We’ll skip over the Gulf War and the years of sanctions; that story’s fairly well known. Then, came 2003 and the U.S. invasion of Iraq. I always found the official excuse of Iraq having WMDs as the reason for the invasion to be laughable at best, considering that we were the ones to give them the WMDs in the first place. Time has proven me right- we now know that the Bush administration knew there weren’t any WMDs, and that the U.S. had been planning an invasion of Iraq. In a piece from two months ago, I told how General Wesley Clark had been told by a Pentagon source weeks after 9/11 that the U.S. was going to invade Iraq, even though the government knew that they didn’t have anything to do with the attacks- thus the made up WMD story.

Which brings us to now. ISIS is a monster of our own making. We either put into place or tacitly supported two of the most brutal regimes of the twentieth century so we could have more of their oil. We couldn’t have cared less what they did to their own people as long as they kept selling us oil. In Iran, we put a ruthless dictator into power that ruled the country with an iron fist for twenty five years. When we went into Iraq, we destroyed the country, killed hundreds of thousands of civilians and put into place a government that mostly kept power because we had troops there. Is it any wonder that an extremist group like ISIS would rise up to fight a centuries old war that resumes when we leave, considering all that we’ve done to destabilize the region, and that the two big players in the region would like nothing more than to have Iraq’s oil to add to their own?

1 thought on “We Create Monsters”