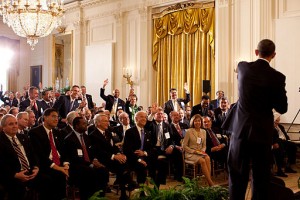 One of the main items on the agenda was confronting climate change. This included climate protection awards, climate panels, and a discussion with U.S. EPA Administrator Gina McCarthy and U.S. DOE Secretary Ernest Moniz. The winners of the 2014 Mayors’ Climate Protection Awards were Las Vegas Mayor Carolyn Goodman and Gresham, Ore., Mayor Shane Bemis. Sacramento Mayor Kevin Johnson, the president of The U.S. Conference of Mayors, said: “Mayor Goodman and Mayor Bemis are changing the energy future of their cities and the nation, showing how local innovation can offer solutions to our growing climate challenges.”

The real irony here is that Dallas, of course, is in Texas. And, the 2014 Texas GOP platform calls climate change “a political agenda which attempts to control every aspect of our lives.” But, I digress…

Earlier in the week at the annual meeting of the Great Lakes & St. Lawrence Cities Initiative in Thunder Bay, Ontario, climate change was a big part of the agenda as well. More than 100 mayors from Canada and the U.S came to the meeting and discussed both climate change and the increasing dangers their cities face from oil transportation.

Keith Hobbs, the mayor of Thunder Bay and the outgoing chairman of the Initiative, used the “hundred year storm” that hit Thunder Bay in 2012 as an example of why climate change preparedness is a must. “(It) destroyed 5,000 homes…. and the wastewater treatment facility was 45 feet underwater… with a $45 million expense so far, And there’s a lawsuit pending against the city for not being prepared for climate change.”

They cited as examples of the dangers of oil transport the Enbridge pipeline spill in Michigan’s Kalamazoo River and the tragic Lac-Megantic, Quebec train derailment and explosion that killed 47 people. John Dickert, the mayor of Racine, Wisconsin, said in a press release: “The reaction on the part of federal governments and energy and transport companies to those devastating accidents …… has been slow and insufficient.”

Occupy World Writes applauds these mayors and their willingness to address these problems. If we can’t get anything done addressing these issues on the national and state levels, we must be willing and able to tackle them on a local level. Our survival depends on us doing so.