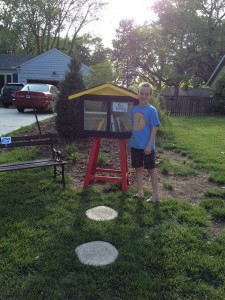 Every once in a while, I come across some legal action so stupid and asinine that I just have to wonder what planet these people who are making complaints and/or enforcing some laws are from, and maybe more importantly, how soon can they go back there.

Brian Collins has a Little Free Library on his property in Leawood, Kansas. His wife had received it as a birthday gift from her father, and Brian and his 9 year old son Spencer put it up on Mother’s Day. An avid reader, Spencer wanted to share his love of reading with the neighborhood. “It’s kind of like I’m in a whole other world and I like that,” he told KMBC. “I like adventure stories because I’m in the adventure and it’s fun.”

The family went on vacation for a few days. When they came home, there was a surprise for them. Sarah Collins, the wife of Brian and the mother of Spencer, said: “When we got home from vacation, there was a letter from the city of Leawood saying that it was in code violation and it needed to be down by the 19th or we would receive a citation,”

Leawood said the library was an accessory structure. The city bans any buildings not attached to the house. Richard Coleman of the City of Leawood says: “We empathize with them, but we still have to follow the rules. We need to treat everybody the same. So we can’t say if somebody files a complaint but we like the little libraries — we think they’re cute — so we ignore it. We can’t do that.” The city further claims they had two complaints about the library.

If the Collins house was three blocks to the north, this wouldn’t be a problem. He would then live in Prairie Village, where the city doesn’t enforce codes that would restrict little free libraries.

I have to wonder what kind of ignorant ass would complain about a Little Free Library. My guess would be some two tooth wonder who wanted to put up a shed for his meth lab and was refused by the city, but I could be mistaken. It is Kansas, after all…