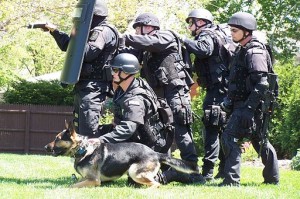 SWAT team before a raid. Photo by User:Fiatswat800 (Own work) [Public domain], via Wikimedia Commons

In the last few years, we’ve seen a worrying trend. Municipal and local police departments across the country are becoming more and more militarized. We see this not only in the staggering amount of military vehicles, arms, etc. being given to police departments under the DoD’s 1033 program, but also in the tactics and more widespread use of Special Weapons and Tactics (SWAT) teams.

Peter Kraska, a criminal justice professor at Eastern Kentucky University, has done research on this proliferation of SWAT teams. His findings state that 89% of police departments serving populations of 50,000 or more had SWAT teams in the late 1990s, twice as many as in the mid-1980s. Furthermore, 80% of smaller police agencies – those serving between 25 and 50,000 people – had SWAT teams by the mid 2000s, up from 20% in the mid-1980s.

In Massachusetts, a number of SWAT teams are operated by law enforcement councils, or LECs. These LECs are funded by several police departments and overseen by an executive board largely made up of local police chiefs. Which leads into this:

On June 24, the ACLU sued the North Eastern Massachusetts Law Enforcement Council (NEMLEC) for records regarding its SWAT team. The ACLU had earlier tried to get information regarding policies guiding the SWAT team’s use of deadly force, training materials, incident reports, deployment statistics and equipment contracts which, considering that the police are taxpayer funded, should be a matter of public record.

NEMLEC, on the other hand, claims it’s a non-profit corporation, and hence is exempt from any public record laws. And indeed, NEMLEC, like some other LECs in Massachusetts, has incorporated as a 501(c)(3) organization.

These LECs oversee police activities and training. Their employees carry guns, wear badges, collect paychecks provided by taxpayers and have the power to detain, arrest, injure and kill. Their SWAT teams carry out raids on private residences. Yet, because they’ve incorporated, they say they’re exempt to Massachusetts’ public records laws.

If this type of thinking sounds familiar to you, it should. It bears a striking resemblance to the U.S. government and its use of Blackwater/Xe/Academi in the Iraq and Afghanistan conflicts, and more recently in the Ukraine. It’s a way for the LECs to avoid all liability, while providing a way to dodge any inquiries into what they’re actually doing.

Occupy World Writes rejects the notion that 80%+ of all communities above 25,000 people need a SWAT team to enforce the law. We fail to see any reason for the militarization of local police departments, and call for the government to stop the 1033 program unless a state or municipality, with the approval of its citizens, can make a case for needing military armament or vehicles.

1 thought on “The Latest Wrinkle”