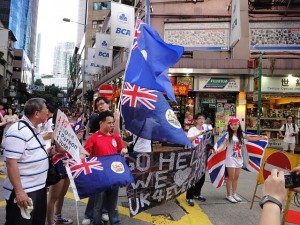 On July 1, 1997, Hong Kong ended 156 years of British colonial rule, and became the first Special Administrative Region of the People’s Republic of China. According to the Sino-British Joint Declaration of 1985;  “The Hong Kong Special Administrative Region will enjoy a high degree of autonomy, except in foreign and defence affairs which, are the responsibilities of the Central People’s Government.” The agreement allows more civil liberties to Hong Kong residents than people living on the mainland, such as freedom of speech and the right to protest. In what’s become an annual tradition, protests take place on the anniversary of the transfer of sovereignty. This year was no exception; an estimated 500,000+ people marched, with 511 arrests being made. Why so many?

Three weeks before, the Chinese cabinet released a “white paper” that had asserted “broad central government authority” over Hong Kong, which had angered the residents. Then, on June 29, a ten day unofficial referendum ended, in which nearly 800,000 people (22% of the voters) had voted to be able to select the city’s leader in 2017. Currently, the candidates for leader are selected by a nominating committee, which consists of corporate representatives and members of the upper class, and appointed by the central government.

On Monday, the Hong Kong and Macao State Affairs Office said the referendum was “illegal” and “invalid.” And on July 1, the day of the march, a state-run newspaper published an editorial saying that recent pro-democracy actions such as the referendum, the march and planned sit-ins in the upcoming days are polarizing Chinese society.

The other issues that spurred the protests will sound familiar to us all. Income inequality’s become much worse under Chinese control; it’s now the 12th highest in the world. One in five residents live under the poverty line. Hong Kong had always been oligarchic, and with Communist Party leaders buying up property as a way to launder millions of dollars, real estate prices went through the roof as well. Government officials and business executives alike get their positions through patronage, not skill. With the Chinese lax environmental standards, pollution’s become worse. Sounds just like home, eh?

And, like here at home, there’s an Occupy movement. Occupy Central With Love and Peace, better known as Occupy Central, was the main group who organized the referendum, and is calling for a mass sit-in later in the year and engage in a campaign of civil disobedience until the central government comes up with an acceptable plan to ensure greater democracy.

Occupy World Writes stands in solidarity with Occupy Central and the people of Hong Kong. We see your struggle and once again realize that underneath the differing cultures and the like we are all the same.