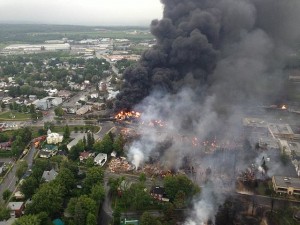 We’ve discussed the current oil production boom and its effects on the environment numerous times in the last few months. The environmental hazards in getting the oil out of the ground are obvious to anybody with half a brain, to be blunt about it. We’ve also discussed the various problems with transporting the oil via pipeline, and how people are resisting the companies who want to expand on the current system. But, we haven’t talked much about the most common way to carry the highly explosive oil coming out of the Bakken oil fields of North Dakota and Montana.

In the year since the Lac-Mégantic, Quebec derailment, where an unmanned train rolled down a hill and exploded, killing 47 people and burning 40 buildings to the ground, we’ve seen an exploding train in Alabama, a 400,000 gallon oil spill and evacuation of Casselton, North Dakota caused by a collision with another train outside of town, and most recently a derailment in Lynchburg, Virginia causing the evacuation of 300 people and spilling flames and oil into the James River, and other smaller incidents. 1.15 million gallons of oil were spilled in rail accidents last year; more than the previous 35 years combined.

We discussed last month how Federal officials are requiring that railroads carrying more than 1 million gallons of highly flammable oil from the Bakken area in a single train – about 35 tank cars – disclose details of volatile oil shipments to the states, and how the railways are asking states to sign agreements saying that they won’t disclose the information to the public. In fact, BNSF Railway Co. and Union Pacific have asked the states of Washington and Oregon to sign agreements that the routes and amount of oil would only be disclosed “for bonafide emergency planning and emergency response activities.” The railroads are fined $175,000 per day and prohibited from carrying Bakken oil until they comply with disclosing the information.

Last week, officials in California, Florida, Montana and North Dakota released information on oil trains running through their states. In North Dakota, oil is being transported by rail through 30 of its 53 counties,, with the largest city in the state (Fargo) averaging more than 40 trains a week last month. Montana had somewhat less traffic, followed by California and then Florida. However, some states, including New Jersey, Pennsylvania and Minnesota, have signed confidentiality agreements or have pledged not to release the information publicly.

However, all is not lost in our fair state. On July 1, stricter safety laws for railways carrying oil or other hazardous materials went into effect in Minnesota. These include the railroads having enough equipment to clean up any spills or leaks within a specified time limit and holds those responsible accountable in the event of an accident or disaster. The railroads must also provide emergency training every three years to every fire department along the route.

Governor Mark Dayton said in a statement: “Trains carrying crude oil pass through our communities every day. We have learned from dangerous accidents in other states that without proper safety measures, that cargo could pose a very real risk to our citizens.” What he didn’t mention was the hard work done by various Occupy Mpls and MN350 people over the last two years in getting these laws passed. Occupy World Writes says thank you and job well done to them; they’ve proved what people united for a worthwhile goal can accomplish.