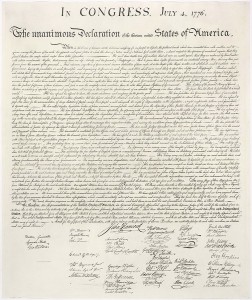 Ah- the 4th of July! If you live in the United States, this means a long weekend (or at least a day off work) for most of us, featuring cookouts with family and friends, fireworks, and generally a relaxing day. But, where are we almost 240 years later? First, some background (and maybe a couple things you didn’t learn in school).

On July 2, 1776, the Second Constitutional Congress voted to approve a resolution of ring independence. John Adams had written a letter to his wife Abigail on July 3, saying:

“The second day of July, 1776, will be the most memorable epoch in the history of America. I am apt to believe that it will be celebrated by succeeding generations as the great anniversary festival. It ought to be commemorated as the day of deliverance, by solemn acts of devotion to God Almighty. It ought to be solemnized with pomp and parade, with shows, games, sports, guns, bells, bonfires, and illuminations, from one end of this continent to the other, from this time forward forever more.”

However, we celebrate the day that the Declaration of Independence was ratified instead,  which was July 4. Although folklore has the Declaration being signed that day (and John Adams, Thomas Jefferson and Ben Franklin all later wrote that they had signed it that day), the copy that currently is displayed at the National Archives in Washington was actually signed on August 2, 1776.

The second sentence in the Declaration of Independence is, without a doubt, one of the most widely known statements about human rights:

“We hold these truths to be self-evident, that all men are created equal, that they are endowed by their Creator with certain unalienable Rights, that among these are Life, Liberty and the pursuit of Happiness.”

So, how far have we come in pursuit of that admirable goal over the last 238 years? In theory, we’ve come a long ways. When the Constitution was first adopted, 13 years after the signing of the Declaration of Independence, only white, male property owners could vote. African-Americans were not only slaves; they were also considered to be only 3/5 of a person. Women were second class citizens. Gender, racial, religious and ethnic discrimination was the rule with hardly any exception, and heaven help you if you were gay. There weren’t any such thing as child labor laws, and 12 hour work days six days were the norm (on Sunday, you had the day off to go to church).

However, in practice, things aren’t so rosy. The median wealth of white families is 20 times that of black families, and the median income of whites is twice that of blacks. The unemployment rate in the black community is double that of the white community. Black men are six times more likely to be incarcerated as white men, and one of three blacks will spend time in prison. In fact, blacks make up 60% of our prison population, even though they only make up 30% of the population. Women still only make 77 cents for every dollar a man makes for doing the exact same work, and up until when the ACA passed, were spending more for the same health insurance coverage. Yet, corporations are considered people by the highest court in the land, and have more rights than the average citizen. How’s that equality thing working?

The Declaration’s next sentence is just as meaningful to us, especially in these post-Citizens United days where corporations are not only people, but have an overwhelming influence in government, and can also discriminate against others due to their owners’ religious beliefs:

“That whenever any Form of Government becomes destructive of these ends, it is the Right of the People to alter or to abolish it, and to institute new Government, laying its foundation on such principles and organizing its powers in such form, as to them shall seem most likely to effect their Safety and Happiness.”

Corporations are not people. Money is not speech. A plutocracy is not a democracy.
We are the 99%