I always wondered why I’ve never felt at home with any of the political parties in this country. The two main parties were in a battle for what they perceived was the center, and the other parties were either too radical or not radical enough. I thought it would be nice to see where the candidates actually stood in contrast to my own political beliefs. Then, I found the Political Compass.

The Political Compass is an amazing piece of work. It’s the brainchild of a professor of social history and a political journalist who saw that defining a person’s political identity as either left or right was only half the story; there was also the authoritarian-libertarian part. So, they came up with a test which asks questions about how you feel on a number of economic and social issues, and you say whether you strongly disagree, disagree, agree or strongly agree. At the end of the test, they plot your score on a graph, with the X axis being the economic scale and the Y axis being the social scale.

The first thing I noticed is that most of my friends who’ve taken the test turn out to be more economically liberal than they thought they were. One of my friends who considers himself conservative and thinks our current President is a “socialist” was both more economically liberal and more socially libertarian than either of the two main 2012 candidates by a long ways. Of course, he refuses to believe their charting of the 2012 candidates.

Charting of the 2012 candidates? Yes indeed. Their breakdown of the 2012 candidates is a must read. It’s absolutely brilliant, especially in regards to President Obama and how far to the right the American political system is, even with one side calling themselves “liberal”. The other fascinating takeaway is that by international standards, our politicians running for public office are either authoritarian or middle of the road. Why are they charted this way? As the creators of the Political Compass explain in their FAQs, they go by the person’s actions and voting records, and not what they say in public. There’s an overview of various historical and current international political figures on their analysis page, as well as having pages for various European governments.

Now, take the test. Where do you stand? Did any of the candidates in the last election even come remotely close to representing your political beliefs? In my case, the problem’s obvious: 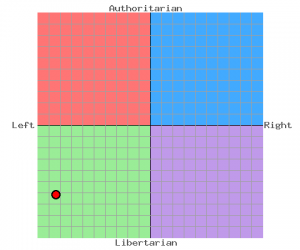 Now that you know where you stand politically, you hopefully have a much better idea of what you want in an elected official. Don’t have any even remotely close? Start grooming your own candidates; first on a local scale (city elections, state and federal representatives), If we can elect people who actually represent us at the local level, we’ve made a big first step towards having the government we want.

2 thoughts on “Where Do You Stand?”