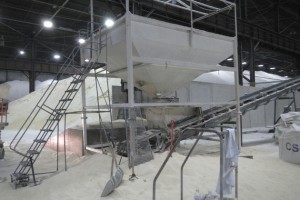 On February 25, 2013, Janio Salinas, a 50-year-old temp worker, was buried alive in a sugar hopper at a CSC Sugar plant in Fairless Hills, Pennsylvania while clearing a clog in the bottom of the hopper. A fellow worker had seen Salinas digging in the hopper, and when he looked again, all that remained was a shovel buried up to its handle. When someone looked up from underneath the hopper, they noticed something that looked like jeans- it was Salinas.

When federal safety investigators reviewed the accident, they discovered that a safety device that would have prevented Salinas’ death was removed 13 days before the accident. Why was it removed? The plant manager believed it was slowing down production.

Unfortunately, scenes like this are becoming all too common in the post-recession economy. More and more companies are hiring temp workers: so much so that the temp industry now employs 2.9 million workers. In the CSC case, every warehouse employee, including the warehouse manager, was a temp worker.

In a ProPublica analysis of millions of workers’ compensation claims show that temps face a significantly greater risk of getting injured on the job than permanent employees. For example, here in Minnesota, temps have a 72% greater chance of being injured on the job than regular employees do. In Florida, temps were about twice as likely as regular workers to suffer crushing injuries, dislocations, lacerations, fractures and punctures. Furthermore, in Florida and the three other states for which records were available, temps were about three times as likely to suffer amputations.

Why such a high accident rate? Temps are often poorly trained or not trained at all before doing hazardous jobs. The companies and temp agencies usually claim that the other was supposed to do the training, and, needless to say, nobody gets trained. There’s also a language barrier in a lot of companies.

Add to that management’s willful ignoring of workplace hazards. When the warehouse manager first asked the management at CSC to install a safety device in the hopper, he was told “we can’t do that” because of monetary constraints. After many complaints to upper management, a screen was finally installed, only to be removed by the manager as stated above. The manager then claimed to OSHA that he didn’t know the screen had been removed. OSHA investigators wrote in their report: “However, statements by employees indicated he had directed its removal.”

And, finally there’s the limits on what OSHA can do. The agency doesn’t have the ability to shut down businesses and has limited criminal enforcement provisions. In the case of CSC, the company was fined $25,855 following the accident. However, after installation of a safety guard and putting new procedures in place the fine was dropped to $18,098. And, even though it removed a safety device and had received previous warnings to train its temp workers, OSHA didn’t find the company “willfully in violation,” which would have resulted in bigger fines. A bill known as the Protecting America’s Workers Act, which would raise fines and criminal penalties for OSHA violations, has been proposed in every Congress since 2004 but has never made it out of committee.

Last Thursday, the head of the U.S. Senate’s workplace safety subcommittee, Senator Robert Casey of Pennsylvania,  wrote a letter to OSHA director David Michaels in which he said: “While I appreciate that OSHA has limited jurisdiction in prosecuting workplace accidents, the growing number of accidents and fatalities involving temporary workers is clearly unacceptable.”  Casey was also concerned about “possible regulatory or legislative impediments to OSHA’s ability to ensure safe and healthful workplaces for temporary workers.”

One of the accomplishments that my father was most proud of was his participation in the meetings in Washington that led to the creation of OSHA. Having at that time recently finished a stint as plant manager of a 3M plant in the Chicago area, he was acutely aware of employee safety and what needed to be done to ensure it. He would be absolutely horrified by how much OSHA has been hamstrung over the years, and that tragedies like the one at CSC could happen with no real consequences for the company management and the company itself.

What can you do? Contact your Congressthing, and let it know that the Protecting America’s Workers Act is necessary. Let it know that it’s not OK that employers can go on injuring and in some instances killing their employees through unsafe practices without facing serious legal consequences.

We need to reinforce the simple fact that profits do not trump basic human rights. People over profits.