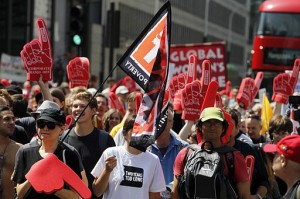 We at Occupy World Writes cover many different topics. If you’ve been following us, you’ve probably noticed that every once in a while two or more topics that we’ve been covering suddenly merge into one through some piece of news that we’ve picked up and reported. Today is one of those times, and it combines two of our favorite topics; Canadian tar sands oil and the TTIP.

Now, you’re probably saying to yourself; “OK- the tar sands I’m familiar with. OWW’s done lots of stories about the environmental issues with the extraction and transportation of them. And, they don’t do anything as far as promoting energy independence goes, as they go to the Gulf refineries and from there out to the world market. But – TTIP? What’s that?”

TTIP is the Transatlantic Trade and Investment Partnership. We covered it briefly in one of our very first posts. And, while its sister agreement TPP (Trans Pacific Partnership) has received much more coverage both here and elsewhere, the TTIP is just as egregious, if not more so, in the way it tosses out national laws and human welfare concerns in favor of corporate interests.

With this in mind, you can understand our complete lack of surprise when Friends of the Earth Europe released a report suggesting that the U.S. and Canada are working to permanently block a regulatory proposal in the European Union known as the Fuel Quality Directive (FQD). The oil industry has repeatedly expressed concern over the FQD, and the E.U.’s classification of tar sands oil as “dirty oil.”

The FQD as it presently stands calls for a six percent reduction in the emissions of transport fuels by 2020. But, in 2011, the E.U. proposed that tar sands and other unconventional oils be recognized as having higher greenhouse gas “intensity” than conventional oil, given that they require more energy to produce – a 23 percent higher intensity, according to a study done for the European Commission. Needless to say, if the E.U. puts the FQD into place, there would be a very limited market for tar sands oil, due to the additional greenhouse gas emissions over other energy sources.

Hence, the U.S. negotiators prefer a “system of averaging out the crudes”, meaning that all forms of oil would simply receive one median score regarding their emissions intensity. This would effectively kill any E.U. restrictions on unconventional oils, and add an additional 19 million tons of carbon dioxide to the atmosphere, according to a Friends of the Earth study.

With some $150 billion invested in Canadian tar sands by the major oil companies between 2001 and 2012, it’s easy to see why the oil companies would be pushing for this. The U.S. was once seen by investors as the logical market for the tar sands oil, but due to both a lessening dependence on oil (and imported oil in particular), and growing public skepticism towards the pipelines and other means of transporting the oil, a different market needed to be found.

So, what would the U.S. offer in return for the E.U. going along with the averaging proposal? A TTIP paper on E.U. energy policy leaked last week suggests that the U.S. abolish restrictions and automatically approve crude oil exports to the European Union. I’ll quote:

“6. In conclusion, a clear signal from the U.S. at this stage that it is accepting the principle of negotiating a specific chapter including provisions on unrestricted access to U.S. natural resources would show our resolve while further encouraging investments in the upstream and downstream energy sectors. Such a signal would also usefully build on the political support recently expressed by the U.S. Administration at its highest levels in favour of stronger energy security and more integrated energy policy in the EU by demonstrating that TTIP could also bring a concrete contribution in this respect.”

Bill Waren, a senior trade analyst with Friends of the Earth U.S., stated: “These documents show that the U.S. is simply not interested in an open, transparent [negotiation] process. Rather, U.S. representatives have been lobbying on the [E.U. regulatory proposal] in a way that reflects the interests of Chevron, ExxonMobil and others.”

He goes on to say: “Major oil investors want to immediately move as much tar sands oil as possible to Europe. Over the longer term, they want to get the investments that will allow them to develop the infrastructure necessary to ship that exceptionally dirty fossil fuel to Europe.”

Ilana Solomon, director of the Responsible Trade Program at the Sierra Club, said: “We strongly oppose attempts by the E.U. to use this trade agreement, negotiated behind closed doors, to secure automatic access to U.S. oil and gas. I think there’s strong support for continued restrictions on this issue among both the public and policymakers, due to the implications for both energy security and the climate.”

Unfortunately, the secrecy and non-transparency seems to be the one recurring theme during the TTIP and TPP negotiations. Wouldn’t you think that if these agreements were to benefit the normal citizen, you’d hear constant jabber in the media about it? When (if ever) was the last time you heard any coverage by the mainstream media about it?

The silence over these agreements is deafening…