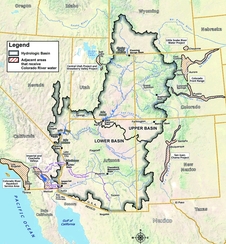 We at Occupy World Writes talk a lot about water, and with good reason. Our planet’s most valuable resource is water. We need it to stay alive; plants and animals need it. Our industries need it. Almost everything we do or consume uses water somewhere or another. We’ve talked about industries polluting our water, but we haven’t really discussed what’s happening with our water otherwise.

The U.S. has been suffering drought in one place or another since at least the turn of the century. The Colorado River basin has been especially hard hit, The U.S. Bureau of Reclamation, which is the federal water management agency, says that the basin has been suffering from prolonged, severe drought since 2000 and has experienced the driest 14-year period in the last hundred years.

A new study by scientists at NASA and the University of California, Irvine finds that more than 75 percent of the water loss in the Colorado River Basin since late 2004 came from underground resources.  Using data gathered by NASA’s Gravity Recovery and Climate Experiment (GRACE) satellite mission, they tracked changes in the mass of the Colorado River Basin, which are related to changes in water amount on and below the surface.

Monthly measurements of the change in water mass from December 2004 to November 2013 revealed that the basin lost nearly 53 million acre feet (65 cubic kilometers) of freshwater. This is almost double the volume of Nevada’s Lake Mead, the nation’s largest reservoir. More than three-quarters of the total — about 41 million acre feet (50 cubic kilometers) — was from groundwater.

Stephanie Castle, a water resources specialist at the University of California, Irvine, and the study’s lead author, said; “We don’t know exactly how much groundwater we have left, so we don’t know when we’re going to run out. This is a lot of water to lose. We thought that the picture could be pretty bad, but this was shocking.”

The Colorado River is the only major river in the southwestern United States. Its basin supplies water to about 40 million people in seven states, and irrigates roughly four million acres of farmland.

Jay Famiglietti, senior water cycle scientist at JPL who’s presently on leave from University of California, Irvine, said; “The Colorado River Basin is the water lifeline of the western United States. With Lake Mead at its lowest level ever, we wanted to explore whether the basin, like most other regions around the world, was relying on groundwater to make up for the limited surface-water supply. We found a surprisingly high and long-term reliance on groundwater to bridge the gap between supply and demand.” He further went on to say;  “Combined with declining snowpack and population growth, this will likely threaten the long-term ability of the basin to meet its water allocation commitments to the seven basin states and to Mexico.”

Meanwhile, in drought-stricken California, somebody appears to have plenty of water. And, funny enough, it’s a corporation. Nestle, through its subsidiary Nestle Waters, operates two wells, the water from which is sold as the Arrowhead and Nestle Pure Life brands of bottled water, on property it leases from the Morongo tribe, and has been doing so for more than a decade. Linda Ivey, a Palm Desert real estate appraiser, asked; “Why is it possible to take water from a drought area, bottle it and sell it?”

Then again, we are talking about Nestle, In an infamous video from 2005, Peter Brabeck, the CEO of Nestle, said that declaring water a right is ‘extreme’, and asserts that water is a commodity best valued and distributed by the free market; in other words, privatized. He’s since said he was taken out of context, but we’ll let you judge for yourself:

I was having a conversation around five years ago with a friend of mine who lives out in LA. He’s what many people would call a futurist; very bright and always looking ten to twenty years down the road. The subject was what we considered to be the biggest limiter or threat to California’s, and hence, to a large extent, the U.S.’s economy in the next ten years. He said not enough energy, and I said not enough water. I’m sorry to say it looks as if I was right.