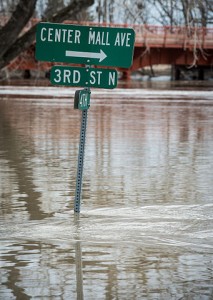 Yesterday, Long Island saw an unprecedented amount of rainfall. 13.27 inches of rain fell at Long Island Mac Arthur Airport in Islip in less than 24 hours,, setting an all time record for most rainfall in New York state over a 24 hour period; the previous record being set during Tropical Storm Irene in 2011.

The same weather system had dumped between four and six inches of rain on Detroit two days prior. While this doesn’t sound so bad, because of the rate it fell and other factors such as the pump infrastructure to keep the freeways clear being overwhelmed, a large section of Detroit was flooded. Freeways were expected to be closed for days; there was more than 12 feet of water in one freeway interchange on the north side of Detroit the day after the rain.

Here in Minnesota, we had record rainfall in June, which led to record flooding for that time of year. But, it’s not only the U.S. that’s seeing this trend. There’s been deadly floods recently in India, Taiwan, and eastern Europe as well; this all in the last couple weeks.

Extreme weather like this will continue. Almost all countries are doing something regarding climate change; building sea walls, cutting emissions through laws, etc. Who’s missing from this list for the most part? The United States. We’ve never ratified the Kyoto Protocol, an international treaty aimed at the issue of global warming (although we’ve signed it), putting us in the company of such countries as Andorra and South Sudan. Canada had signed, but withdrew from it in 2011 due to its investment and involvement in tar sands mining. So, what’s our excuse?

When we have people in our government say such absurdities as Mars and Earth share the same temperature or that greenhouse gases such as CO2 aren’t harmful or, even worse in ways, having them admit there’s a problem but the solution is to “let the other countries worry about that,” we have a problem. If we have more important items on the agenda than this, we would certainly like to know what they are and whether the American people agree. What is more important than preventing the planet from becoming uninhabitable for the human race, and questionable that it can support life at all?

Don’t like the unpredictable weather? Too bad; get used to it…