On Sunday, we wrote about something which became the biggest story in the country over the last few days; the killing of Michael Brown, an unarmed black man, by the local police.

We heard about the looting and riots that Sunday night. We saw the FAA declare a no-fly zone over Ferguson, and tell reporters to leave the area. We saw the steady ramping up of the police response, with them acting more like a paramilitary force than a civilian law enforcement agency as time went on. 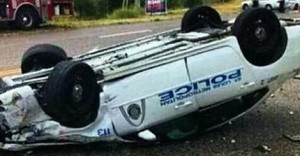 Then, Wednesday night, we and the rest of the world watched in horror as the police in Ferguson proved themselves to be every bit as repressive and thuggish as the police in those countries that we regularly chastise for human rights violations.

The buildup had been going on ever since Sunday’s riots. Though the demonstrations since then had been mostly peaceful, the police became more and more aggressive as the days went past. The smell of tear gas filled the night air; a chemical agent that’s banned in warfare (by an international treaty that we as a country signed) – that is, unless the warfare’s inside our own borders, evidently. But, I digress.

During the day on Wednesday, the tension built. We saw the chief of police make a statement saying that the citizens could protest during the daylight hours. However, he softened his stance when asked by reporters if this meant that a curfew was in place. The tension built more.

Then came the arrest and assault of two reporters guilty of nothing more than taking pictures of the police as they came into the McDonald’s that the reporters were using as their base. One was from the Washington Post, and the other from the Huffington Post. The ironic thing here is that the Washington Post with all of its reporters around the world had only had one other reporter arrested this year – that was in Tehran. The police then tear gassed and fired rubber bullets at an Al Jazeera America news crew while they were setting up their equipment. 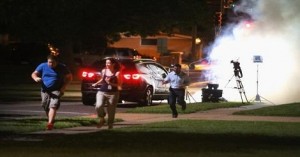 The pictures coming out of Ferguson Wednesday night looked like a war zone, with clouds of smoke (or in this case, gas) hanging over everything. Fireworks filled the skies as the police used stun grenades and tear gas on the peaceful protesters, and fired rubber bullets at them. The world was watching, and most of us didn’t like what we saw.

The condemnation of the police and shows of solidarity with the people of Ferguson were quick to occur. Yesterday there were Moment of Silence events nationwide paying respect to victims of police brutality. Palestinians living in Gaza took to Twitter to instruct the residents of Ferguson how to deal with tear gas. This was oddly ironic, as the former St. Louis County Police chief Timothy Fitch had taken counterterrorism lessons from the Israeli government back in 2009, and had been in charge of the St. Louis County Police until his retirement earlier this year. Because after all, who knows more about crowd control and tramping on civil rights more than the Israelis do? But, i digress again.

Today, two voices that had been strangely absent from the conversation chimed in. First, President Obama made a statement, deploring both the looting and the police overreach, saying that there was “no excuse” for either. Then, Missouri Governor Jay Nixon removed control of the operation from the St. Louis County and Ferguson forces, and instead put the Missouri State Patrol in charge, naming Captain Ron Johnson as the commander. This move not only put someone who could relate to the community in charge (Johnson’s black and had grown up in Ferguson); it also made one person in charge. Up until then, the decision to fire tear gas, use rubber bullets and the like rotated among the four main police groups there (St. Louis County, St. Louis (the city), Ferguson and the Highway Patrol); hence, no overall accountability.

Captain Johnson made his presence known quickly. Not by massing troops in military garb holding guns on the protesters as had been the rule for the three days before, but by joining them as they marched down the street. The State Troopers were out, but it was obvious that they were there in case something happened, and not as an oppressive, occupying force to be reckoned with.

This doesn’t mean that all the problems are over; far from it. There’s the problem of under representation; Ferguson is almost 70% black, and blacks account for 93% of the arrests made by Ferguson police. The 53 man police force only has three black officers, and the black community’s not represented in the local government and school board either. Then, there’s the fact that the Ferguson police department still hasn’t released the name of the officer that shot Michael Brown, even though they’ve published the names and addresses of nine people who were charged with looting in Sunday’s riots. The two separate sets of rules idea runs deep in Ferguson, as it does in many other cities and towns across the nation, any of which could blow up as Ferguson did this week.

But, hopefully the powers that be learned three very important lessons that need to be applied at a national level. The first, of course, is don’t kill unarmed people. The second lesson is that you can only push people so far. We’ve had four fairly well publicized cases of police killing unarmed black men within the last month alone, and Ferguson isn’t alone in its vast difference between the majority of its population and who calls the shots. Finally, the third lesson, which is just as important, is to treat your citizens with respect. Up until last night, the police treated the people of Ferguson more like animals than as fellow human beings, and acted more out of fear than anything else. Last night, the police treated the protesters as fellow human beings, and respected their right to peacefully assemble; something that the citizens of Ferguson are thankful for.