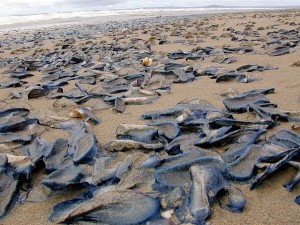 Velella velella on a beach. Photo from Flickr via Wikimedia Commons.

We have yet to explore 95% of our world oceans.

Researchers continue to gain understanding as technology and improved equipment allows them to boldly go where no one has gone before. This week, a new study was released in Climatewire and reprinted by Scientific American, that revealed astonishing information about how the oceans are absorbing – and hiding – the heat from global warming.

As the oceans absorb heat in the Atlantic and southern oceans, the heat is absorbed in the salt of the water. As the water travels to the arctic, this layer of heated salt sinks when  it meets the cold arctic waters. As a result, our oceans don’t cool, they store heat and expel it over decades of cycles. As global warming increases, these patterns will become more difficult for the earth’s natural cycles to control.

But that’s not all that worries us. We also have recently learned through research off the west coast of the United States that human-ocean acidification has reached a level that now endangers shellfish.

Oysters take three years to grow to a marketable size. As CO2 is absorbed in water at a rate 10 times faster than in any other medium, carbon dioxide is changing the ph balance of the ocean’s water. Shell fish like oysters, scallops and mussels need calcium and carbonate to develop and grow their shells.  Shells can’t form when acidification of the water takes place.

The bulk of the world’s population is located near coastlines. This is because our oceans have always provided humanity with what seems to be an unlimited food source. What will we as a human race do once the oceans are no longer able to support the food chain that provides for the species we consume?

For the last several weeks, west coast adventurers in the US have been photographing Velella velella, or “by-the-wind sailors,” the silver-purple sea creatures that vaguely resemble jellyfish which are typically found well out in the ocean. They are washing up on the beaches from Washington state to southern California. Some experts tell us there is nothing to be concerned about; they blew in with the wind.

If that were true, why have we not seen them every time there is a west wind blowing for any amount of time? Are we to believe there is no connection between ocean acidification, rising temperatures and the dying of species we have not even fully studied yet?

But you can sleep well, knowing there will be no shocking news tomorrow from the Science world in America. Our congress has decided we should not fund any research that supports or studies global warming or climate change. We can save that money and keep our heads buried in the sand on the beach, while dead species wash up around us.

Beach party, any one?