No seaport, no airport, but at least an easing (not a lifting) of trade and travel restrictions were basic terms agreed to in the latest peace talks between Gaza and Israel. “Hundreds of Gazans gathered at an intersection in Gaza City on Tuesday to celebrate an “unlimited” ceasefire agreement reached between Israel and Hamas. The Egyptian-brokered deal went into effect at 7 p.m. local time (noon ET), and provides for an immediate opening of Israeli border crossings to aid and reconstruction supplies,” NBC reports.

But it is not over. Not by a long shot. 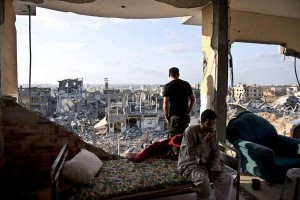 According to a report from NBC, “It came to my mind that it’s good idea to show the whole picture – how Gaza looks now, rubble, destruction, cement with sand, small rocks,” Aloul said. Other hashtags doing the rounds on Facebook and Twitter included #dustbucketchallenge and #remainsbucketchallenge.

The challenge emulates the ALS Ice Bucket Challenge, but done with resources available in Gaza. If you can find water in Gaza, there is no electricity with which to freeze it into ice. Some of Aloul’s friends suggested that he use either a bucket of blood or shrapnel. Knowing these items were more difficult to come by outside of Gaza, he chose the rubble from the destruction.

Occupy World Writes encourages you to accept this challenge and to pass it to everyone you know. We also believe that this Rubble Bucket Challenge should continue not only until PEACE is achieved amidst this crisis, but also until Gaza has been rebuilt. Until Gazans can look to a future with education, basic human needs and rights, economic security and the freedom to welcome a peaceful future, this crisis is not over.