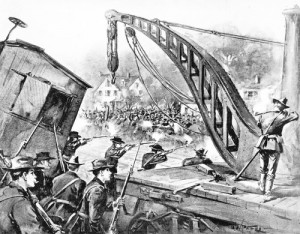 Violence in Chicago escalated when federal troops came to break the 1894 Pullman factory strike, as illustrated in this drawing from Harper’s Weekly. More than one thousand rail cars were destroyed, and 13 people were killed. (Photo courtesy Chicago Historical Society) via WikiMediaCommons.

As we read about yesterday, the Right -to -Work (for less) folks don’t believe in honoring “Labor Day” since the holiday has the connotation of honoring organized labor.

in 1894 President Grover Cleveland asked Congress to declare a holiday celebrating “labor” on the first Monday in September. The reasons behind his request were as convoluted as the Freedom Foundation”s decision to work on Labor Day- if you go to their website, you will find out that they took the Friday before Labor Day as a holiday. (yes we boycott the national holiday, but we WILL take a day off anyway) NO hypocrisy there, correct?

Labor unrest had been so prevalent in 1894 that President Cleveland had called out the National Guard to try to quell the national railroad strike.  The Guard was ineffective at getting the striking workers back to work, and the leader of the American Railway Union, Eugene Debs, was imprisoned for 18 months for contempt of court for not calling off the strike when ordered to. A Federal Judge actually halted the strike by placing an injunction against the strike on the grounds that  the strike interfered with the delivery of the US Mail, most of the which was delivered by train in 1894.

Why did President Cleveland ask for the date to be in September? Because May 1 had already become an international day to celebrate “Labor”. Cleveland did not want the celebration in the United States to become “radicalized” by celebrating at the same time as other labor celebrations around the world.

Labor Day offered a day for organized labor to celebrate its’ achievements of a less than twelve hour workday and the 5 day work week. In the last 120 years, Labor Day ‘s significance has been a mirror to what is going on in the labor movement in the United States. Today the struggles with blatant hostility against unions shown by the Koch Brothers, the Tea Party, Walmart and other corporate “citizens” show us that ‘Labor Day’ is still a day hard fought for. (I think Walmart ran a “Labor Day Sale” promotion- although those workers did NOT get the day off.) The flip side of that fight is the fact that fast food workers and day care workers are seeing that union representation is part of the key to a better life.

Only time will tell if the United States will still have a Labor Day holiday 120 years from now. if so, what will be the reasons it is celebrated? If not, what will be the catalyst for it to no longer be significant?

LIVE BETTER, WORK UNION. We at Occupy World Writes hope you enjoyed your labor day for all the right reasons.