One of our country’s finest features is our National Park System. It’s grown from its humble beginning in 1864, when Abraham Lincoln signed a bill granting Yosemite Valley and the Mariposa Grove of Giant Sequoias to the State of California “for public use, resort and recreation… inalienable for all time,” and the first federally administered park (Yellowstone in 1872- the federal administration came about due to problems with California administering Yosemite) to the present day’s assortment of over 450 natural, historical, recreational, and cultural areas throughout the United States, its territories, and island possessions. 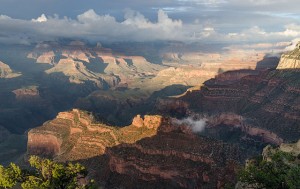 The purpose has remained the same throughout the years; to preserve places of scenic beauty and/or historical significance for the public’s use and enjoyment. However, if some of our elected officials (and some who want to be elected officials) have their way, this won’t be true any longer.

Last Friday, Colorado had their first gubernatorial debate. In the debate, the Republican candidate Bob Beauprez went on the record as supporting the seizure of Colorado’s national parks, forests and public lands by the state government. And, in a campaign document, he lays out his plans to “reestablish state rights and duties,” including  “establish[ing] a process for taking control over public lands back from the federal government.”

He’s not alone in his quest. Others who publicly support the states seizing public land from the federal government include such people as both Senators from Arizona (John McCain and Jeff Flake), both Senators from Utah (Mike Lee and Orrin Hatch), everybody’s favorite psychopath (Texas Senator Ted Cruz), the leading contender thus far for the 2016 GOP presidential nomination (Kentucky Senator Rand Paul) and Congresswoman Cathy McMorris Rodgers from Washington (the Chair of the House Republican Conference and the highest ranking Republican woman in Congress).

Why do they want this? Because then the oil, mining and timber interests can pressure the states into selling the rights for drilling for oil, mining and logging, of course. Instead of preserving and protecting these lands for our enjoyment, they’d rather chase after the almighty dollar, and to hell with everybody else.

The cost to the taxpayer would be immense. In Colorado, for example, 36% of the land is public land owned by the federal government, who pay for maintenance and the like. Then, there’s the money brought in by the tourist trade, and the jobs that catering to that trade provides. The current Colorado governor, John Hickenlooper, stated in the debate that the estimated cost to Colorado taxpayers of transferring Colorado’s national parks, forests and public lands to the state would be at least $200 million dollars. On top of that, the additional costs of fighting wildfires in those areas could easily be in the hundreds of millions of dollars.

We’ve already seen the results of this profit driven agenda in some locations. For example, there’s fracking going on in the Everglades near a major nesting site for the wood stork, a species just recently taken off the endangered species list. We can’t forget the damage done to the Gulf Islands National Seashore by the Deepwater Horizon oil spill. Or the steady chipping away of our National Forests by the timber industry. Or…

This would affect all of us, whether we realize it at the present time or not. Our National Lakeshores and Recreation Areas sit on some of our most abundant supplies of fresh water. Our National Forests are not only beautiful to look at; they also scrub carbon dioxide out of the air, and prevent land erosion. The last known living examples of many species live on our public lands. Is it worth destroying all of this in the name of extracting a finite amount of resources from the area so that some company can make a profit? We think not.