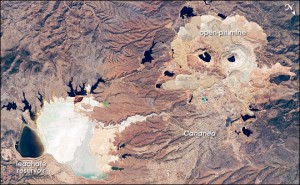 We write a lot about spills and other environmental disasters that happen in the U.S. and Canada, but we don’t report very often on things happening south of the border. However, we ran into a story out of Mexico which, as is typical with our media, isn’t getting half the coverage it should.

On August 7, a pipe either blew out or became unseated, allowing over ten million gallons of toxic wastewater containing sulfuric acid and heavy metals to spill out of a leaching pond at the Buenavista copper mine in Cananea, Sonora – about twenty five miles south of the U.S. border near Nogales, Arizona – into the Bacanuchi River.

As seems to be the case so often in these events, the company who operates the mine (Grupo Mexico; one of the world’s largest copper producers) did not immediately notify government officials of the leak. Only after residents of the area had noticed a reddish color to the water (in some places, it was orange) and a foul smell to it did Grupo Mexico report the spill. By then, the spill had moved into the Sonora River, causing authorities to keep 88 schools closed, as well as shut off the water supply to 20,000 people in seven towns.

The mine offered to provide water to the public, but did not come close to meeting local demand. The amount supplied was barely enough for drinking requirements, and far short of the amount needed for bathing and other such essentials. iIn some places the price of a gallon of water went from $1.50 to more than $9.

This last Friday, Sonoran state authorities said that the mine is still causing pollution and the facility’s owners are blocking the work of investigators probing the accident.  At a press conference, Carlos Arias, director of the state civil protection agency, said “As of this moment, the government of Sonora (state) totally breaks off any relationship with the mining company.”

Environmental issues are nothing new for Grupo Mexico. In 2009, Asarco, the American subsidiary of Grupo Mexico, paid the U.S. government $1.9 billion to settle claims for hazardous waste pollution across 19 states; a record settlement at the time. That same year, over 200 serious health hazards at the Buenavista copper processing facilities (the same facilities that had the spill we’re discussing) were reported by a Cananea occupational health and safety (OHS) team.

This whole story is too familiar to us. Once again, we see a large corporation have an accident that has turned into an environmental disaster due to the corporation’s incompetence and/or unwillingness as far as planning for and reacting to the accident goes. When are we going to say enough is enough?