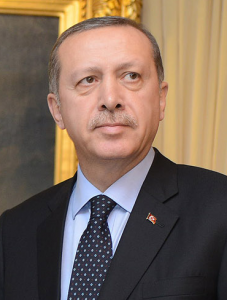 In yesterday’s post, we talked about what’s been happening recently in Kobane and the utter failure of the U.S. media in covering it. We discussed the protests in Europe over the lack of support for the Kurds, and we talked about the Turkish government’s criminal behavior in regards to Kobane and the Kurdish refugees fleeing the area.

Yesterday, police used tear gas and water cannons to disperse Kurdish protesters as unrest spread to at least six Turkish cities. At least eighteen people died in the unrest. This violent reaction to protests is nothing new for the  Erdoğan government, as Human Rights Watch pointed out in a recent report.

Why the protests? It’s because of Turkey’s actions (or to be more precise, the lack of action) in the coalition against Daesh. The Turkish government last week won parliamentary approval for military action against Daesh inside Syria, but Prime Minister Ahmet Davutoglu says this will only happen if “others do their own part:” in other words, if the international coalition moves against the Assad regime, and not just Daesh.

However, given Turkey’s history of animosity towards the Kurdish population, we have to wonder if the Turks are just letting the Daesh exterminate the Kurds before they make any move towards countering the threat they pose. Right now, the Turkish army sits on the Syrian border watching utter destruction take place in Kobane. They aren’t making any move towards Kobane; in fact, they aren’t allowing the Kurdish refugees from that area cross the border, but instead are forcing them back towards the Daesh. A curfew has been instituted in the Kurdish regions and cities of Turkey in response to this crisis.

The Human Rights watch report states, ironically enough, that one of the positive things happening in Turkey in regards to human rights is the government’s negotiations with the Kurdistan Workers Party (PKK). Turkey’s publicly stated vs actual stance on dealing with the PKK is disingenuous, to put it mildly.

But the MOST DISINGENUOUS insistence by the Turkish government to attempt using this crisis to further their elimination of the “Kurdish problem” within Turkey, a plan which has been enacted and practiced on for well over 30 years. Turkey wants to establish a no-fly zone and a “security” zone in the Rojava region of Syria, the only part of Assad’s country that, until the emergence of Daesch, remained stable because it is controlled by the Kurdish population within Syria.

If you are confused, you are not alone. The following plea is urgent and explains things better than we can. The importance of its message can not be over stated. Considor what you can do to help save Kobane. Contact information is included at the end. ACT TODAY, BEFORE IT IS TOO LATE.

Urgent Call: Stand Against Demands for a Buffer/Security Zone Between Turkey and Syria

Kobanê, one of the three autonomous Kurdish enclaves in Northern Syria, on the border with Turkey, is once again under attack by the IS. The Islamic State (IS – formerly known as ISIS, the Islamic State of Iraq and Syria) has besieged Kobanê on three separate fronts and is at the moment shelling the city relentlessly.

The border between Syria and Turkey is a straight line that runs mainly through flat plains.  A tank or armoured car can sail through these plains with no difficulty.  The plain is inhabited by peoples of diverse ethnic or religious background: Arab tribes, Yezidis, Syriac Christians, Armenians and Kurds.  Many of the Kurds are relatives of Kurds on the Turkish side of the border and have been in constant interaction in the past. Kurds had been living in Syria without any formal citizenship status.  After the start of the uprising in Syria, they declared their autonomy in July, 2012.  These autonomous zones are small enclaves where the majority population is Kurdish and which are separated from one another by zones inhabited by Arab tribesmen.  Since 2012, the Kurds of Syria have tried to establish a democratic form of self-rule where everyone would be equal, regardless of ethnic or religious identity and of gender.  They have called these enclaves of self-rule Rojava, or The West.  Kobanê is one of these enclaves and, since September 15, the target of fierce attack by IS, armed by superior weapons.

Local observers ranging from international reporters to Kurdish inhabitants of the region and the Kurdish forces of Kobanê have regularly claimed that the Turkish-Syrian border is systematically transgressed by the IS.  They obtain, it is said, personnel and ammunition from supply routes through Turkey.  This has led them to conclude that Turkey is using the IS to clean the region of its Kurdish inhabitants.

The Turkish government has, since the inception of the Syrian civil war, made no effort to hide its opposition to the Assad government and has provided support to various Islamic groups fighting in the Free Syrian Army.  It is now claiming that the best way to fight Assad and the IS, is to establish a buffer/security zone between Turkey and Syria.  This zone can be in no other place than in Rojava.

We, the women from the Women’s Initiative for Peace see this proposal as a disingenuous move to kill many birds with one stone. The Turkish state has initiated a peace process with the Kurdish guerrilla forces (the PKK – Kurdistan Workers’ Party) with which it has been waging what it called a ‘low intensity war’ for over thirty years. In spite of talks between the Turkish state and the imprisoned leader of the guerrillas, the government of Turkey has been refusing to honour the agreements they have reached and does not take the steps necessary for the peace process to go forward, steps which the Kurdish side has been waiting for, for more than a year. It is in this atmosphere that we now see the state of Turkey at best allowing the IS to raze Kobanê to the ground and proposing a buffer zone which will allow the declaration of Rojava as an empty land.  According to the Kurds, this is another way of fighting a dirty war against the Kurds, another way of not recognizing the will of the Kurdish people.  They say talking to the Kurds in the north (Turkey) while fighting those in the West (Kobanê) means ending the peace process and the ceasefire that has lasted almost two years.

We, women, want the Turkish state to honour its pledges.  We do not want the peace process to end.  As women, we know that war targets women and that women pay a very high price during war.  Turning overnight into refugees, women have crossed the Rojava border and flocked into Turkey, a country that does not grant legal refugee status to persons arrivingfrom its southern borders.  Refugee camps, forced resettlement, the declaration of their homes as empty land is the bleak future that Rojava women now face.

Rojava is not empty.
Kurds have a government there.
Not having a state should not mean not having a home.
Stop the forced eviction of Kurds from yet another of their homelands.

Please send the attached letters to the Turkish government and to the United Nations.

Addresses for the United Nations:

Adresses for the Turkish govt: