As you’ve probably noticed by now, the protests in Hong Kong have captured our attention. We normally wouldn’t write another piece on them so soon (we wrote about the protests two days ago), but there’s so much happening that we feel it’s worthwhile to catch up with what’s going on. 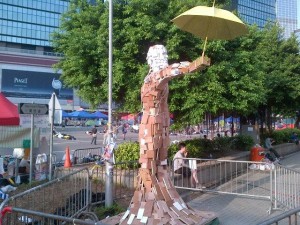 The iconic image of “Umbrella Man” at the protest site in Hong Kong. Image via Twitter.

What I personally find fascinating are the similarities in the responses both here and in Hong Kong to protesters by the powers that be. You might be thinking; “Similarities? Between what’s supposed to be the land of the free and the largest authoritarian regime on the planet?” Why, yes – that’s exactly what I mean. Let’s look at some examples.

On Wednesday, the media and communications adviser to Leung Chun-ying, Hong Kong’s Chief Executive, posted a photo to Facebook that was supposedly of a police officer who was wounded in clashes with the protesters the night before. This was circulated by supporters of the police as evidence that the protesters weren’t as peaceful as they claimed to be. This sounds similar to Ferguson, Missouri and the supposed pictures of Officer Darren Wilson that were circulated in the conservative media as “proof” that Michael Brown had assaulted Wilson, leaving Wilson no other option but to shoot Brown in self defense, doesn’t it?

It turned out that this wasn’t the only similarity. Like the supposed pictures of Wilson, the photo of the police officer turned out not to be of who they said it was. Instead, the photo was of an actor who plays a zombie police officer in a HKTV show called Night Shift, and was a still photo from one of the episodes.

Then, there’s who’s actually directing the response. The New York Times, in an article yesterday, said that according to former Hong Kong and Chinese government officials, as well as other experts, it’s the Beijing government who have been directing the response to the protests, and not the local government. Once again, this sounds eerily similar to the response to the Occupy movement here in the US, where documents obtained through FOIA requests showed that the crackdown on the Occupy encampments were coordinated by DHS and the FBI, with the local police for the most part following their guidance.

Or, maybe it’s not so surprising. After all, in almost all the unrest around the world over the last few years, there’s been common themes. We want to have a voice in our government. We want to be able to earn a living wage. We want our children to be educated. We want women and minorities to be treated with respect and as equals. We want affordable housing. We want the opportunity to be the best we can be. With all that in mind, is it surprising that those in power follow the same script as well?

The world is waking up. Every day, we read of more demonstrations, more protests, more people saying enough is enough. Occupy World Writes reaches out in solidarity to all of these people across the globe. Together, we can change the world.